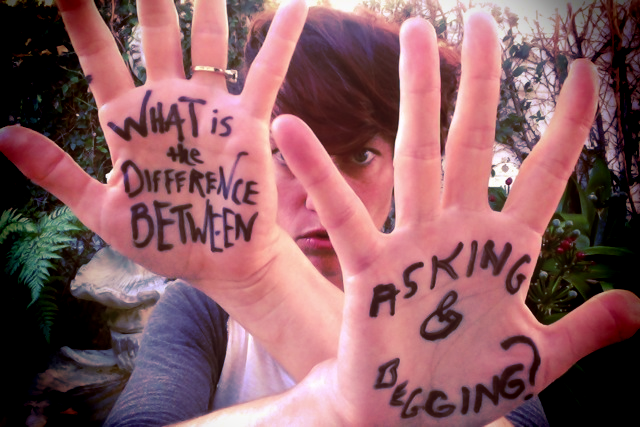 so, uh, no drumroll possible, because the title of the blog gave it away.

i just signed a book deal, my first real one.

and the answer was, to all of them…”thanks for asking, but i…don’t fucking know. my life is a chaos-fest now, i have an extra helping of friends with illnesses, the trolls are partying so loudly under my bridge that i can’t sleep at night, parts of my general business infrastructure have collapsed under the weight of their own french-slapstick-style miscommunication comedy of errors, and i’m about to go on tour for about six months to deliver the postponed tour and the rest of the kickstarter house parties.”

WHEN i would possibly make time to write a book, i had no idea. i can barely find time to blog on tour, and most of the time i’m so exhausted and braindead i can’t even pick up a newspaper and read it without my attention drifting up to the ceiling.

but then i thought about it.
and strangely enough, the poem kerfuffle tipped the balance.

there’s always a silver lining…isn’t there?
my life had racked up so many bloodied overcoats with silver linings lately that i could start selling them wholesale by the truckload to the Look On The Fucking Bright Side Factory Outlet.

after i wrote the poem and dealt with the ensuing drama and unwanted attention, two things happened.

the first thing that happened was the book offers coming in started getting serious.

and the second more important thing that happened was that i started actually wanting to write a book.

and now i’ll tell you why i thought that, and what i want to write about.

i’ll also start this all off by saying: i’m going to need your help, the help of THIS blog, YOU peoples.
i will need your help a lot. i will be asking. for answers, for feedback, for questions, for guidance.

at the very same time death threats were coming in and the general snarky internet outlets were compiling meme-able lists of 10 Reasons Why Amanda Palmer Is a Terrible Person, i was also getting stopped on the street by people who’d never heard my music (and probably were never planning to hear my music), and hugged tearily as they told me stories about how my TED talk came to them at some pivotal point in their lives. i had an unprecedented influx of people on my blog, on my twitter feed, and in my voicemail inbox saying “keep being you. keep doing what you’re doing.”

but what WAS i even doing?

fucked if i know.

the tour, while full of love and massive enthusiasm and over-the-top reviews, was cut short by my decision to stay home with anthony while he dealt with his cancer.
the album, while critically hailed by the magazines and papers and deeply loved by the fanbase, was a commercial disaster compared to everyone’s enthusiastic projections.

meanwhile, i was getting extreme psychological insights into everyone around me: people fearing for their lives and health, people fearing for their jobs, for their marriages…and people dealing with the deaths of their own infants. it’s been a dark year, my friends. and i watched it all play out in front of me like a greek tragedy, the veil of tears of fear and human pain and occasionally the faceless, masked choruses turning towards me and wailing WITCH WITCH WITCH and GENIUS GENIUS GENIUS at equally deafening volumes.

i was also dealing with my own relationship with neil, and how difficult the “art of asking” was in the claustrophobic, emotional sphere of me and this sweet british writer-guy i’d found myself married to.

this was what i was seeing all around me.

this is the stuff that i decided would be the fundamental building blocks of a book.

asking, and why it is hard.
what is happening to artists now that the system has collapsed, and the new relationships and paradigms that are rising from the ashes of the old models.
how complicated the connection is between MONEY and ART.

so a few months ago, off i went to 12 different publishers with my one-page book proposal.
i spent two full hectic days in new york having meetings with all of them. some of them made offers, and i chose the one i thought was going to do the best job:
grand central publishing, which is a branch of hachette. they’ve recently published books by amy sedaris, jon stewart, stephen colbert and jane goodall.
i think i’m in good company.

so back to us.

i’m going to be working on the book here in LA for the next few days, before i fly to new zealand for next week’s tour, with editorial/conceptual help from my friend jamy ian swiss. he was my main coach for the TED talk, spending hours and hours agonizing on the phone with me about what to cut and what to keep. it seemed like a logical thing to do to ask him to hold my hand through this book process.
i’m also going to be leaning on neil (he’s a pretty good editor), anthony, and a few other inner-circle friends to help me through what i’ve heard is an incredibly hard process.
but i figure, i blog. sometimes i blog up to 6,000 words at a time. this book is going to be about 50,000 words. that’s about 8 or 9 blogs. no problem. right??!!!?!?!?!?!

i’m going to be asking you guys a bunch of questions, and i want you to answer.
argue. with me. with each other.
deflate me.
inform me.
your stories and what you’ve seen.
i’ll be asking TONS OF QUESTIONS.
and i’m going to be at this for the next six months, at least.
the book doesn’t have an exact shape, but it’s definitely NON-FICTION, it’s definitely going to have a lot of ME in it, and presumably a lot of YOU.
i’m going to probably get some more legally-binding disclaimers for the blog (saying basically that if you post here, you’re ok with your post being used for the book), but for now, just know that if you post here, the content is FODDER! (ok? ok.)

so here we go.
in the comments below, answer me this: 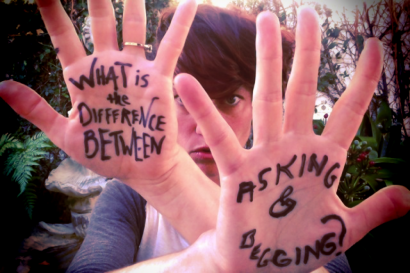 and if you’re pictorially impaired: this is the question:

WHAT IS THE DIFFERENCE BETWEEN ASKING AND BEGGING?

answer that in any way you see fit. if you see comments that move you, or anger you, or somehow affect you…say it. talk back.

i’ll read all the comments tomorrow as i’m outlining.

EDIT – FEB 6, 2014: peoples! this is legalese stating that i CAN USE YOUR COMMENTS, or portions of your comments – in the book, freely, and you won’t come suing me. you’ll be seeing it at the bottom of every blog where i’m asking for comments that i might use in the book. don’t be scared.

By submitting information and/or comments to amandapalmer.net/category/blog/ or amandapalmer.net/blog/ (hereinafter referred to as “AFP’s Blog”), you grant AFP’s Blog a perpetual, royalty-free license to use, reproduce, modify, publish, distribute, and otherwise exercise all copyright and publicity rights with respect to that information and/or comment at its sole discretion, throughout the world, including storing it on AFP’s Blog servers and incorporating it in other works in any media now known or later developed including, without limitation, published books. If you do not wish to grant AFP’s Blog these rights, it is suggested that you do not submit information to this website. APF’s Blog reserves the right to select, edit and arrange submissions, and to remove information from the AFP’s Blog and website at any time at its sole discretion. You further agree and acknowledge that submitting information and/or comments to AFP’s Blog does not entitle you to receive any compensation, credit or approval rights. You understand that AFP’s Blog has the right but not the obligation to use your comment.

new BOOK question! and this one’s deep and long. (insert your mom joke).