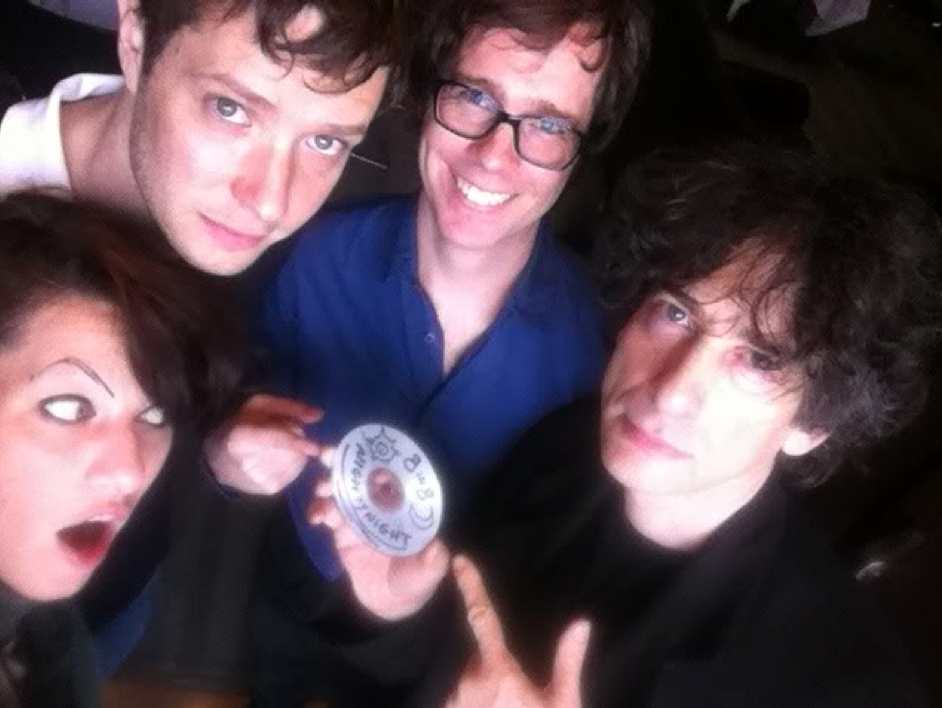 me, neil, ben folds, and damian kulash have finished our crazy project, and we’ve officially titled the album “nighty night.” the band is officially called “8 in 8”.
here we are with it: 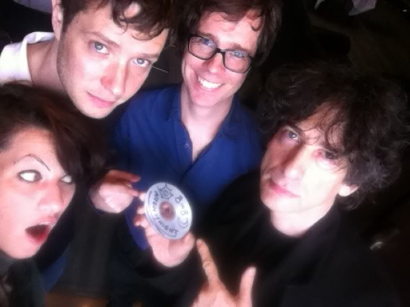 while we didn’t manage to record 8 songs in 8 hours (studio time was roughly 12 hours, from 4 pm-4 am, in which we knocked out SIX completed tracks), we all considered the project a 100% success.

it’s ready for you to download (for now, exclusively) at bandcamp: music.amandapalmer.net

the whole album’s available for a minimum donation of a buck, and for the first two weeks, all of the money donated is going to Berklee City Music Boston. they’re one of a few like-minded music programs in cities all over the U.S. who are providing kids with every opportunity to see their musical potential. so, a dollar. for six songs. please feel free to donate more if you can, and tell your friends. you can use this link we made for you on twitter, facebook, sky-writing-airplanes, etc: http://bit.ly/GET8in8

the thing i’m most happy to report:we accomplished what we actually set out to do, which was to spend time together, create something beautiful that never existed before, and see what we could do by giving ourselves a deadline, some parameters, sushi, and the ingredients for some relatively decent gin and tonics.

if you didn’t get a chance to tune in, we’ll hopefully have the footage cut and posted about the internets, soon. and if you DID manage to catch it (or even crazier, watched the WHOLE THING), thank you, from all of us. a lot of people tuned into the webcast, and the comments on youtube, twitter, and getglue were all awesome. neil was asking questions via the #8in8 hashtag, and sourcing song titles and lyrical-inspiration from it. 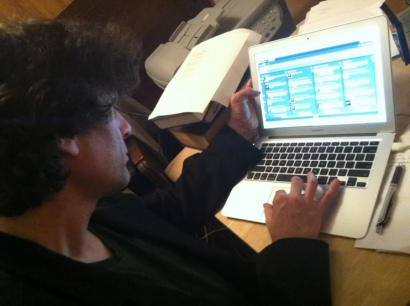 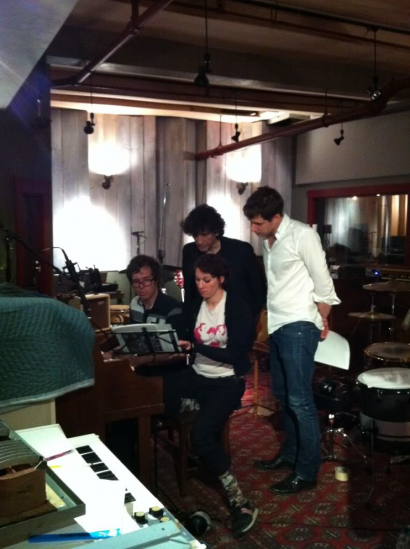 all of the lyrics were almost entirely originated by neil with the help of our twitter army, but every single song was then frankensteined by its song captain…for instance, “the problem with saints” is 100% neil, but “i’ll be my mirror” wound up being 71% me, and damian took a lot of control for “one tiny thing.” ben started the lyrics for “because the origami” from someone answering a twitter call from neil for “ways love goes wrong.” other great questions that led to song-lyics-inspiration were “most memorable kiss”, which neil wrote but we didn’t have time to turn into a song, and “name of famous people”, which yielded both the nikola tesla song and the joan of arc song (aka “the problem with saints”) when someone on twitter complained that they were sad that nikola tesla won neil’s vote.

here is the tracklist:
1. Nikola Tesla
– vocals and piano by amanda
– drums by ben
– bass and synth by damian

2. Because the Origami
– vocals by ben & amanda
– piano by ben

3. One Tiny Thing
– vocals and ipad’ing (bed piano) by damian
– mellotron by ben (i think, have to check)
– additional acoustic piano by ben
– handclaps by amanda, neil, damian, sean (@indecisean, not slade, we had two sean’s), super kate, and hayley

4. 12 Line Song (but it’s pretty much being called “The Squirrel Song”)
– vocals and piano by ben
– acoustic guitar and tambourine by damian
– drums by ben
– back-up do-do-do’s by damian and amanda

5. I’ll Be My Mirror
– vocals and piano by amanda
– omnichord and guitar by damian
– drums by ben

6.  The Problem with Saints
– vocals by neil (i’m so happy he sang this one. he sounds awesome. and so british)
– piano by ben

someday we plan to release a 23 CD box set with extensive re-mastered tracks. it will come encased in a plastic coffin and weigh over 2 tons.

now would be a really good time to thank all of the people who helped make this project not only possible, but fucking great and flawlessly easy to produce…

our producer, sean slade, who jumped on at the last minute and without whom there’s NO way we would have gotten such rad-quality sounds.

here he is, waving his arms madly: 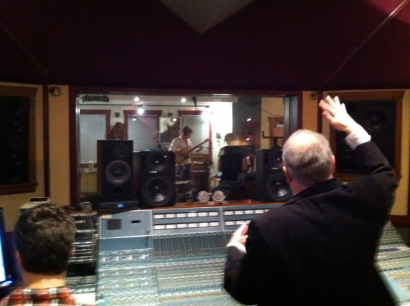 • our onsite team, fielding/helping/making things work: okgomike, super kate, sean, and hayley
• everyone at berklee and rethink (especially allen bargfrede, tony brown, reggie lofton, rob rose, and scott mabuchi)
• the miracle-making (incredibly patient and rad) people at getglue (fraser kelton, kimber myers, matt, dominick daniello, and karen teng)
• cassandra long, for her kick-ass album artwork (and for letting us tell the story about our cab ride to the studio in “i’ll be my mirror”)
• youtube, for hosting our insane-webcast
• ethan and jen (and everyone else) at bandcamp. shit’s so easy to setup and get out into the world on bandcamp, if you’re a musician and not on there yet, you gotta sign up. it made this crazy project a little less crazy, knowing we’d have a home for the songs as soon as we mixed them

and especially everyone in the studio who cranked with us for four and a half hours longer than they had expected to, without a single complaint:
• pope and noah (who kicked ass in the webcasting department)
• benny grotto, master of the board. here’s benny & sean slade  hard at work: 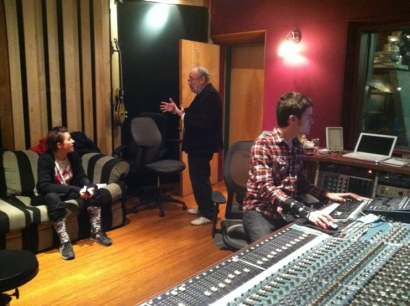 and last but not least, the incredible plaid-clad assistant engineers – j. saliba and adam hand – who executed our every whim; helping us musically, lyrically, and technically, those guys were flawless.

this whole project would not have been possible without these people’s help, so all of you should give them a round of applause. really.

here’s the whole band, right before we started: 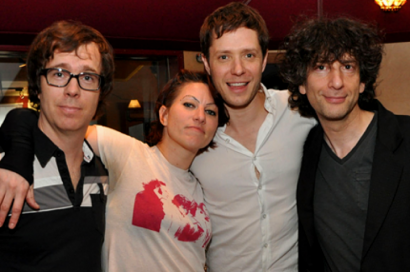 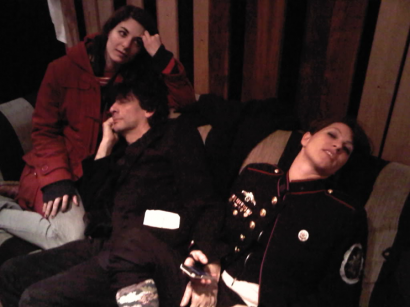 we discussed the album at a panel this morning at the rethink music conference after only four hours of sleep. you can watch it here:

we all went off to take quick cat-naps before our performance, which we’re mere minutes from taking the stage for. edit 4/28: it was also webcast, and as always, people tuned in via at partyontheinternet.com

if you missed it, you can see the whole thing here (i come out to introduce us about an hour in):

here’s who played:
• 8in8 (playing both band-songs, as well as some of our solo stuff)
• the wonderful young talent tristan allen (who joined me for a song some of you may know)
• basia bulat
• black joe lewis and the honeybears
end of edit

and with that, i’m off. see you on the other side.

ninja video attack!!!! 8in8 videos are rolling in! make one!