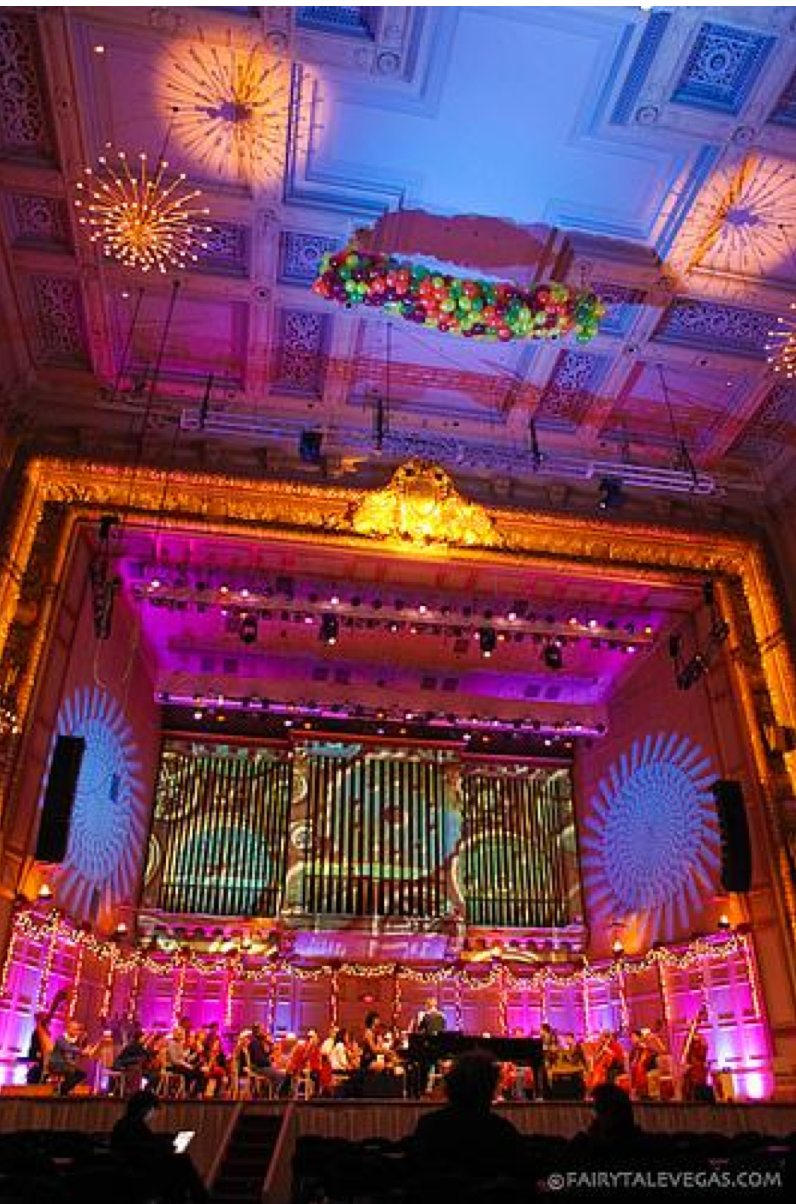 still life with author and chainsaw

sitting at home right now, up late and unable to stop working…700 more emails to answer and a huge tour to prepare for that won’t even happen for a few months.

i feel like i’m stuck in a rusty cuisinart. moreover, i just decided to take two days away from home and new york to go to the golden globes with neil, who got nominated for coraline.
this is awesome but also means my brain turns into more of a reduction sauce for a fancy squash dish.
rg.
anybody have bjork’s email?
i want to ask if i can borrow her swan dress and maybe trick it out with some sequins and blood.
that plus my armpit hair will make sure they never invite me back to hollywood. 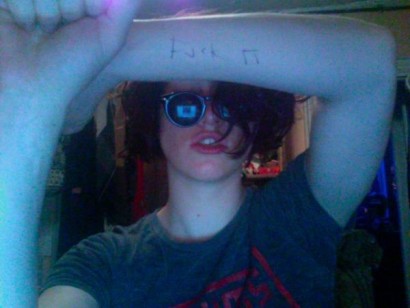 lee has a cold and i have a full house of guests right now, jason webley is here…and so are the evelyn twins. they refuse to sleep in a real bed and instead insist on sleeping on the floor on four thick carpets with sleeping bags (don’t ask) and so i trip over them every time i have to walk from the bed to the bathroom. they’re so weird.they’ve been trying to use twitter and jason and i have been encouraging them, but it’s slow going. more on that noise later. it’s been a trip. they’re practicing hard, though, and jason and i are helping them with their piano songs and stage outfits for this spring. we’re all excited to bring them on tour. the london tickets are selling well (each night is over half sold out„„get tickets HERE). for those who were confused, the order of the night is jason, then me, then sxip, then the twins. you should not miss this fucking show.
tickets are also going up super-soon for some other cities so be sure to watch the dates and follow the AFP news twitter…

mostly i’m just spaced-out, full and tired. i have a life hangover the size of 2009.
literally and figuratively; i feel like i haven’t been genuinely hungry in a week but i keep eating…since mealtime still comes.

and re: hangover…
i cannot give enough thanks to all the folks who came out to the new years show at the pops….it was fucking incredible.
i haven’t prepared so much for a show since….i don’t know. a long time. probably since the dresden dolls’ roundhouse DVD shoot, which took
months and months to put together.

i did go ONE MINUTE over the curfew, which of course cost their unions thousands of dollars. (oops.)

and i spilled champagne on the stage (sorry.)

the pops were fucking RIGHT ON. i developed a twitter relationship a few days out with the bassonist…
i mean, how rad is an orchestra that has a guy with a twitter name like @BigGayIceCream?
keith lockhart led with aplomb, we got rave reviews in the boston globe and boston herald, and generally kicked ass all over the place.

the best bits of the night were the tchaikovsky (which i fairly butchered even after those dozens of hours of practice), “missed me” (which i’m still hoping will surface on youtube),
“hurt” (the NIN song. i’ll embed the clip up at the end of this blog), and “pokerface” (yes, “pokerface”, the way your mother never intended it).
stay tuned, all will be explained.
the clips are still spilling in…filming was verboten but things are creeping up onto youtube. i’ll post them as they come, with photos and stories behind all.

for now, some other photo highlights.

symphony hall, all decked out…. 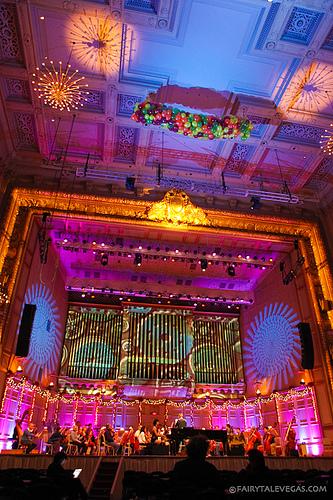 this outfit was hand-sewn by elena sanders, and looked fucking amazing: 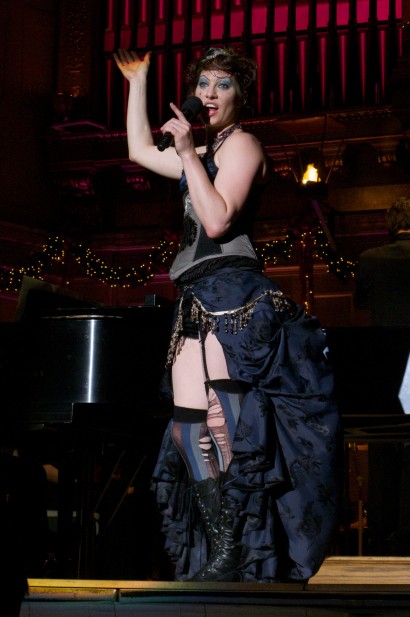 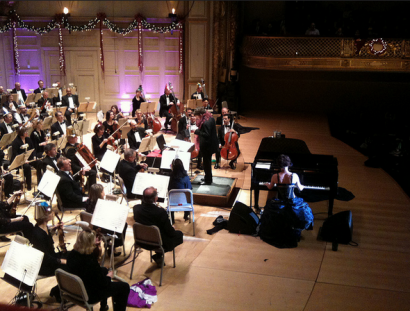 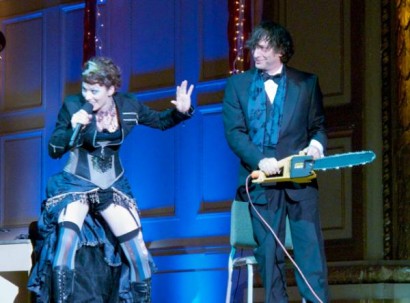 his hair is always doing the most incredible things. i think i might love his hair more than himself.

speaking of incredible things…
the night itself was a mad mix of people and opening bands and mayhem out in the lobby, half of which i couldn’t see.

but i did manage to sneak down to the dining room (right before i played) and do a quick song with miss tess and her back-up band….
this is us attempting “makin’ whoopee” with her band figuring out the song as we went along….(this dress was handmade by kambriel of http://www.kambriel.com) 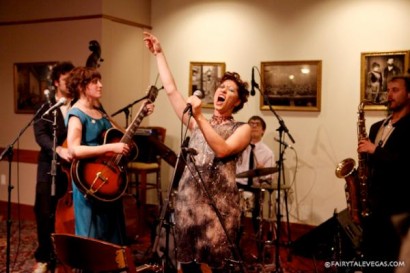 this is lance, holding my leg during dress rehearsal earlier in the day…. 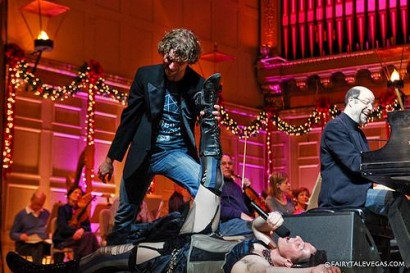 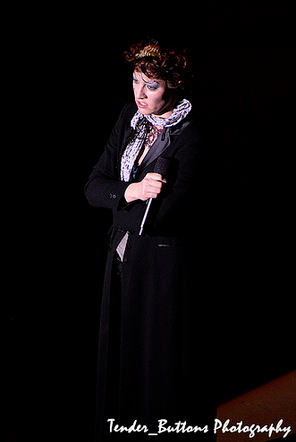 me & the crewe singing “mein herr” from cabaret.
the boys in drag were a huge hit….. 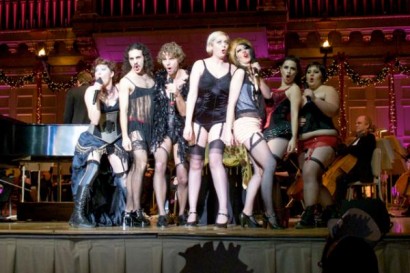 the dress rehearsal for “leeds united”…. 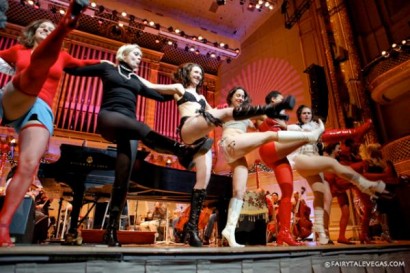 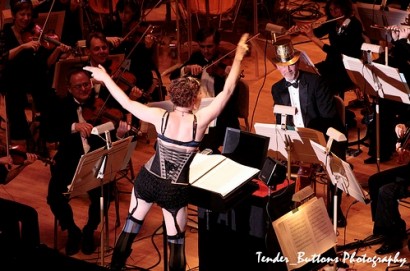 but all told, this was my favorite moment of the evening……

while the orchestra struck up “auld lang syne” (to which, i must admit, i knew not a single fucking lyric), i took a minute off, located and kissed my doxy on the stroke of midnight (or close, i think it was 11:59).
this photo was taken by the geidts, from the balcony.

i love this man so much. i really do. 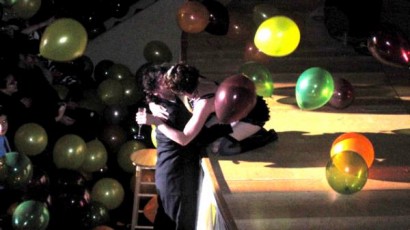 TWO THOUSAND AND TEN FTW.
i hope all your new yearses were as good as mine.

i used to hate fucking new years. i could never find a genuinely good time. the hangover was never worth the party.
this one was.
my house and the cast of the show stayed up til 7:30 am, bumping to a mix that becca darling made of michael jackson and beyonce.

a) join a band
b) go solo
c) fall in love
d) secure boyfriend for new years
e) find a national orchestra to sit in with.

p.s. if you’re in NEW YORK, follow me on twitter right quick.
i’m about to announce a way to get a spot to a totally private evelyn evelyn party that jason and are throwing during the day next tuesday *somewhere awesome* in manhattan.
there will be no tickets sold and we’ll only give spots to about 20 people. follow me HERE. also, if you’re in NYC and have a weighted, 88-key keyboard we can borrow, email hayley at amanda palmer dot net.

p.p.s. as promised, NIN’s “hurt”, with the pops (arrangement by lance horne):