in the past year, a lot of shit has happened.
let’s round up, while i have insomnia in brooklyn on this last day of the year.

i finished and released my awesome solo record.
i found a great manager.
i got to work with ben folds, and neil gaiman and lots of other cool people.
i learned that i can tour solo and kick ass.
i spent a lot of time with really good artists and friends.
i ate really delicious foods.
i shot some incredible videos.
obaaaaaaaaaaaaaama.
i wrote some good songs.
hundreds of belly photos.
i fell in love for the first time in a long time.
i went to many exotic and comfy places in the world.
i did a shitload of yoga.

not so nice things:

my label decided not to promote my awesome solo record.
they also asked me to get off my fat ass and write them some commercially viable music.
i switched management four times.
i dealt with the drama of the dolls being viewed as collapsed due to a youtube comment.
i lost all my savings when my record contracts didn’t get dealt with properly.
i got my foot run over by an irish car on the second day of tour.
i watched my lovelife get all fucked up.
people quit. people left. people got fucked up.
my incredible videos were pulled from the net by a corporate penis-battle.
i left many of my belongings in many exotic and comfy places in the world.
i felt increasingly disconnected to my old life, but i still live in it.

i was talking to my good friends josh and alina tonight (some of my oldest and best, i am staying with them tonight in brooklyn so i’m already here for the big party and show in new york) and i was telling them about some of the shit that’s happened just in the past few months.
the tour manager quitting. the bus driver being fired. the canceled projects. the financial crisis. christmas being a disaster. the hurting heart. the family bullshit. the record tanking. (i am able to laugh at how flattering it is that “who killed amanda palmer” is showing up in lots of “most overlooked records of 2008” categories – yay – ?). they looked at me and said: for someone who’s just been through all that in the course of a few months, you seem incredibly happy.

but i am, though.
none of this shit is lasting, first of all, and more importantly, i spent most nights of the last few months on stage and connecting.
and i played my fucking songs on the piano and people liked it. that part is not fucked up. it is not broken.
and as long as that doesn’t break, i’m fine. love comes and goes in all sorts of forms and ways.
nothing is lasting. everything is returnable with a receipt. i got more great hugs this year than ever before. is it just me?
or did the quality of hugging go up because everyone is just that fucked up this year?

i walked through harvard square the other day and there were four people with signs giving out FREE HUGS.
i took three hugs and broke down weeping twice. two out of three ain’t bad.

i am the luckiest.

to be able to do this, this way, with you, right here, right now, there is no place i would rather be.

2009 will be the year we fucking wake up from history, my friends.

(see a bunch of you in NYC tonight. i am going to wear a tutu.) 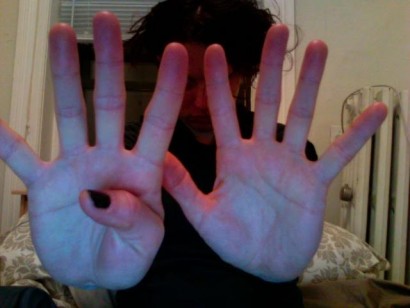 jason webley is on tour. you should spread the word & go, because nobody i know has ever regretted going to a jason webley show.

Full details are up at: http://www.jasonwebley.com/events.html

corn mo and sxip shirey are both playing in NYC with jason, and sxip and jason are going to be shooting a video for their new single at the show, it sounds like they’re going to try to stage a bizarre faux new years party, so come dressed to kill.