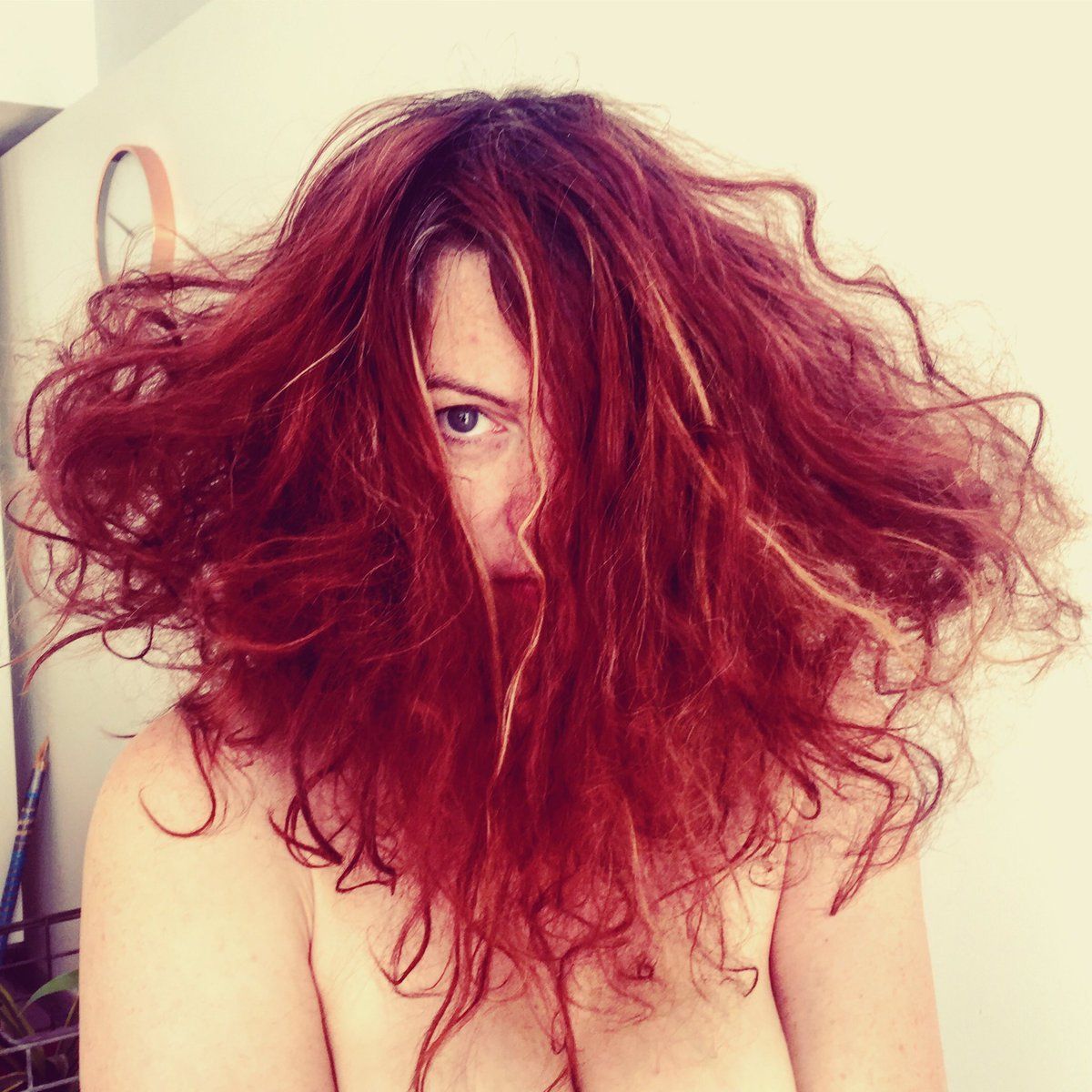 NEW BLOOD, LONG POST. and “rainbow” clarity…and some other things.

(QUICK: if you are in CANBERRA, i have a few tickets to gie a way to a special talk THIS SUNDAY after the show, see below….

if you are IN or ANYWHERE NEAR SPAIN and you want to volunteer for a film/performance project we’re working on…down at the bottom, too.)

ok, first of all, this is what i look like without my hair twisted up. neil thought this was hilarious enough yesterday morning to take a photo of. YOU DIDN’T KNOW THIS, DID YOU? RIGHT? it’s true. i have a ton of hair. and yet….my hair is very shy, to make up for the rest of me. it likes being hidden away in a nest of bobby pins.

actually, it likes being hidden away in a nest of bobby pins because my hair is FINE as FUCK and honestly if i don’t pin that shit up it gets in my face and i don’t even understand a little how people of all genders have long hair that they wear down. how do they keep their hair out of their faces?? what do they do? how do they live?

i look at them with awe.

this reminds me to remind you of one of the best fuck-you break-up songs anyone ever wrote about me. it was written by my ex ad frank (we dated in 2002) and it is called “If I Find Another One of Your Bobby Pins In My Bed I’m Coming By To Shove Them Up Your Ass”. he has a way with song-titles, that ad frank (and album titles…that song was from the spectacularly named “Ad Frank Is The World’s Best Ex-Boyfriend”). i’ll put the link at the bottom as a speical treat for getting through this entire post, which is pretty goddam long.

to more important news and cause of celebration….

since i last posted here a few days ago…600 people have joined the patreon. SIX HUNDRED! that’s so many new people and i am so bowled over with giddiness and excitement and gratitude.

if you’re new, welcome, welcome, WELCOME…it’s really nice here. make yourself at home. i DO read all the comments, so if you wanna write me a note down below, go for it (i’d love to know where you guys are from, and if you wanna tell me how you found out about the patreon, i’d love that too…i’m a nerd).

without getting sentimental…i’m feeling particularly grateful these days to have this patreon. everything about the world seems uncertain, systems are failing left and right, labels are collapsing, trump wants to totally defund the national endowment for the arts, and here i am, overwhelmed with opportunity every day that i get to call my own shots as an artist and extend all this bounty to my own collaborators.

i am one lucky goddam artist. so **thank you** – whether you’ve just come aboard or you’ve been here since day one. what you are making possible for me and my friends is incredibly unique and we aren’t taking it for granted for a second.

because there’s been a lot of questions popping up in the WAKE of the “I Can Spin A Rainbow” announcement….

FIRST, to clarify: YES, ALL PATRONS (even the $1+ folks) will receive a download of the CD version of “I Can Spin a Rainbow”. we will email you a link to the download on may 3rd in a post like this that is for patrons ONLY. the $3+ folks will get ALL the bonus songs (i.e. what’s on the LP and 7″ as well….and, as usual, all the video downloads). got that? good. i like taking care of you $1 folks. i know you aren’t promised downloads, but when a huge record like this comes out, i like sending it. why not.

there have been some questions about Alex’s UK shop! ok….basically, since i don’t have a label/merch store in the UK or europe, i was getting sad seeing the UK/Euro folks paying CRAZY shipping prices from the US. so alex agreed to fill his flat with merch and records and be our distro center. here is the weird thing: now that the new album is on sale and the numbers are in, it seems – believe it or not – that if you’re in CANADA, which is NEXT TO THE US, that it’s cheaper to HAVE YOUR LP or CD SHIPPED FROM THE UK.

why? ugh. reasons. the way things are working with our distro in the US right now is just slightly expensive. we’re working on fixing it. so, AGAIN: international shipping (shipping to anywhere outside the US) is likely cheaper using the UK store.

and…you get to know that alex manhandled your package.

IF YOU HAVEN’T ORDERED THE NEW RECORD YET, GO!!!

a reminder: if you want to get the patron-only 7″, the post is HERE for patrons-only: https://www.patreon.com/posts/at-last-i-can-8141374 …this post is public because there’s so much other info on it).

THIRD….!
we have a new video coming out for “beyond the beach” SOON….and it will not be Thing’d…i’ve decided to keep this one a freebie – we have two other videos in the works that are going to be officially thing’d, and the album itself is going to be Thing’d, and i’m like…that seems a bit like Thing Overkill. so i paid for this one out of the general floating album budget and that’s that. maybe i should have – but i didn’t. who cares. everything is working and nothing’s losing money. hooray.

TOUR IS SELLING OUT SUPER FAST!!!! which is awesome. i am so excited for these shows. some of the US shows are 90% sold out – please don’t delay on getting tickets for this one. get them now..and help me spread the word. let’s sell this fucker out. http://amandapalmer.net/shows/

if you’re a $100+ patron and you haven’t gotten in touch about guestlist, hit hayley@amandapalmer.net, she’s there for you.

any other questions??? HIT ME IN THE COMMENTS. i’m reading, hayley-the-helpful is reading, and there ain’t nothin we can’t answer.

the day after the sold-out gig, i’ll be at the canberra theatre AGAIN….late morning on march 5th for canberra’s All About Women satellite event. geena davis’ talk from the main event in sydney will be broadcast live in the theatre and i’ll be speaking in a panel conversation afterwards with virginia haussegger, zoya patel, alana valentine, and the hon. senator katy gallagher right after.

the event starts at 10am and the panel starts around 12pm. more info here:

this is a free ticketed event, but advance tickets have “sold out”. i have a THREE individual guest list spots to give away to patrons. if you can make it to the event at 10am on march 5th, comment below with “I want to go to AAW!” and hayley will confirm the first three people!!! hit it!

people of SPAIN-FRANCE-THEREABOUTS…want to perform in a piece of filmed performance art with a ton of other people? (please share this if you know anyone in the area!!!!) OK…LET’S DO THIS. back to our roots we go.

for an upcoming THING for the patreon, i am working on a music/film collaboration with Abel Azcona, an absolutely wonderful performance artist based in spain. i just recorded a new song in tasmania (which some of you on the australian tour have heard live, and if not….you’ll hear real soon here/via patreon) and abel is working on something to go with it….a beautiful group performance art piece. don’t want to give too much away. he needs volunteers!

all the proceeds from this Thing will be going charity (more on that later, and it’ll all make sense when you hear the lyrics of said new song). but first, if you’re in or near spain and want to make some art with abel, read below for info on how you can participate in the video shoot.

this is going to be quite an emotional experience….you’re going to be really feeling, performing…moving through space. he will direct you, you don’t need to have any acting talent. (but it’s a plus if you’re a performer of any type.)

this is a volunteer art project!!! if you don’t understand what that is, see 1) my TED talk 2) my book.

we’re hoping to get a few hundred people. ALL AGES are welcome.

– the video will be shooting on March 11th at 3pm in Tarragona, Spain.

– the meeting point for all volunteers is at 2:30pm in Cala Romana (it is the name of a small beach) in the city of Tarragona, 45 minutes from Barcelona.

– dress code for the video shoot: wear full black clothes, nothing fancy, bring a change of clothes for after the shoot and a towel to dry.

– the performance will last around two hours and will end at 5pm.

YOU NEED TO EMAIL ABEL!!! you can volunteer to participate starting NOW until March 10th by sending an email to abelazcona@live.com and you will be provided with more instructions and a confirmation!!

you guys are going to love this one. (i hope, it’s looking amazing so far).

i am already crying.

(note: i’m not going to be there!!!! i’ll be, unfortunately, performing in cairns that night. but abel and i are going to be psychically communicating)

p.s. i promised…here’s the link to the ad frank song: https://www.youtube.com/watch?v=nc5JdkIkjfY …the kindest song it is not, but that’s coming from yours truly, the woman who penned “backstabber.”

p.p.s. don’t you love the cover art of that album? he’s asleep and drunk in a bathtub. i want someone to paint ME like that. it’s never too late.

2. see All The Things i’ve made so far on patreon: http://amandapalmer.net/patreon-things/

AND HERE WE GO….”I Can Spin A Rainbow” premiere on Under The Radar!!!

to aid and inspire you during the post-holiday crash…