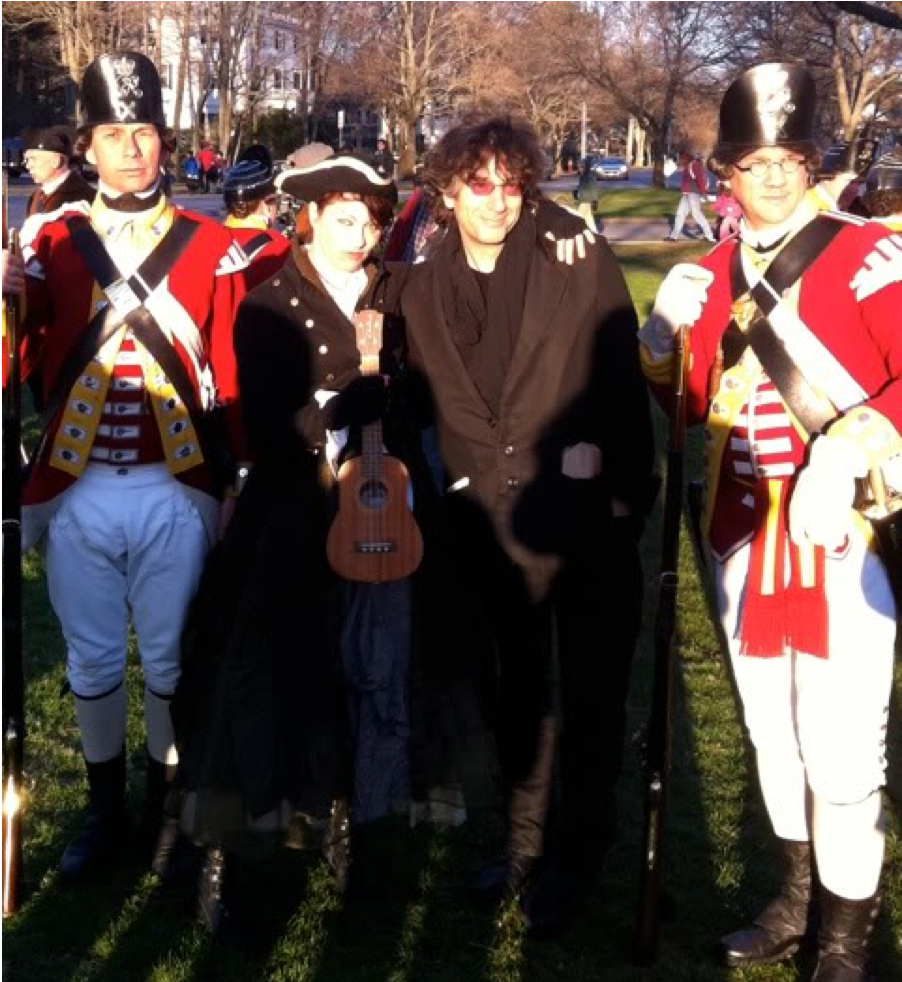 lay down your arms, you damned rebels

i dragged neil and superkate out to the 6 am to my hometown of lexington, massachusetts, for patriots day.

growing up in lexington, patriots day was a variant of christmas.

you followed tradition and bravely awoke at 5 in the morning and trundled to the center of town to watch the historical reenactment of the battle of lexington and concord (http://en.wikipedia.org/wiki/Battles_of_Lexington_and_Concord), where the revolutionary war against the british began. then you ate pancakes. then you went to the parade.
i was force-fed this stuff from day one and i STILL can’t get enough of it.
i still get teary-eyed at the sight of a minuteman with a musket. i am a complete sap for these 1775 rag-tag farmers with guns, outnumbered by troops of well-dressed lobsterback british militia who DESTROY them year after year. the outcome is, sadly, always the same.
we always lose. 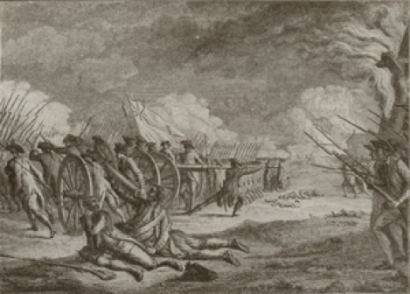 but we won in the end.
by 1776, we must have had a reason to set off fireworks and stuff.

and every year i go as an adult, i get sadder and sadder.
we were such a happy-go-lucky little country, just trying to defend our rights to drink tea in peace and not pay ridiculous taxes and re-export all of our raw goods to the fucking queen to get re-sold back to us at five times the cost. we were farmers with guns.

maybe we still are.

how is it i can feel romantic about these old-school farmers with guns?
how is that possible?

i was raised to believe that these farmers with guns were heroes. fantasy. easter bunny farmers.

i hate new-school farmers with guns.

we woke at 4:50, hauled our ladder to the battle green, which is only about a ten minute walk from my childhood home, and grabbed a spot on the fortman’s lawn.

then we watched everyone shooting at each other. 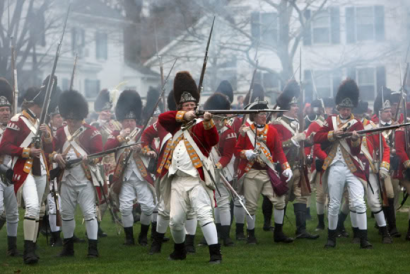 the most brutal part of the reenactment is always when the women come out to tend to the wounded and the dead: 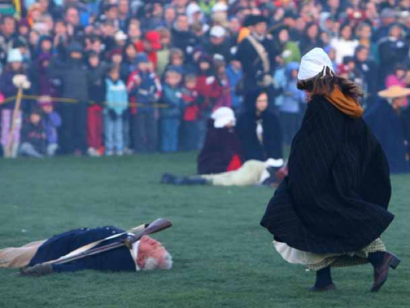 and then, of course i played a ninja gig. my hands were freezing and i could barely feel my ukulele.

neil, not quite sure who’s side he’s on here…. 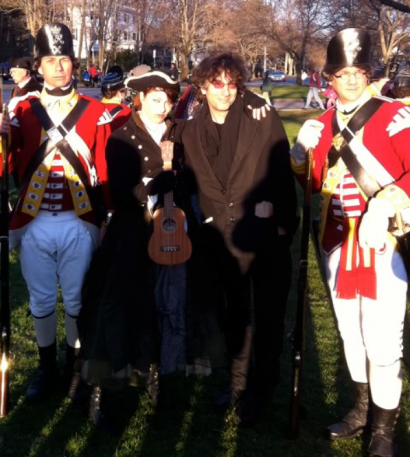 here’s a bunch of the gang who were brave enough to get up at 4 am to come….i applaud you.
i announced the gig on twitter only. 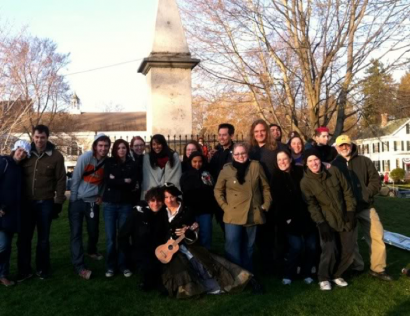 and then we all ate pancakes in the church basement.
and made out (well, not all of us) in front of a man in period dress. 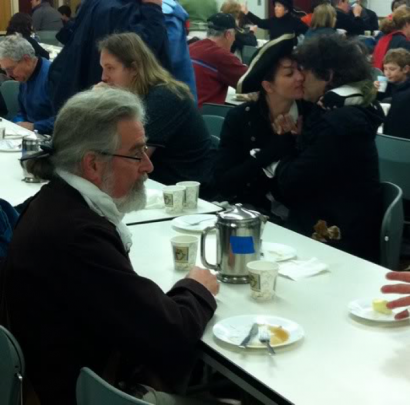 then we went home and took a nap, and got up to see the parade.

this is neil and superkate standing behind a man in a funny uniform, watching the massive army tanks roll down the streets of lexington while blasting national-anthem music out of tinny loudspeakers.
sometimes i can’t believe what i grew up with and accepted as normal. 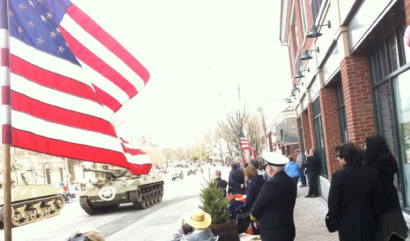 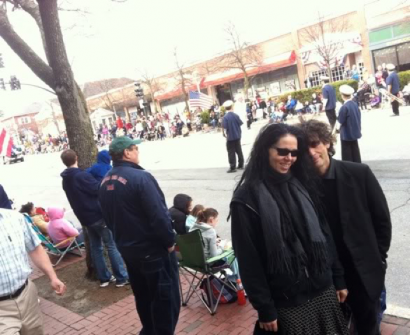 i told them both the story about how when i was a senior in high school, me and three of my friends very effectively crashed the parade.

me, steve mccabe, kristine masters and claire (i think, maybe it was marisa, or maybe it was both of them) stole two shopping carts from the local stop&shop grocery store, bought a bunch of candy, took my mothers scottish flag and flagpole, and mounted the flag on the shopping carts.

we raided my closet for the weirdest clothes we could find (which wasn’t difficult) and dressed ourselves in an assortment of tutus, robes, funny, hats military jackets, and ball-gowns. i remember steve mccabe dressed up in a purple ballerina costume, flowered sparkling tights, facepaint and skiing goggles. i think i have a picture of this somewhere. i’ll try to find it while i’m excavating this apartment.

we dubbed ourselves “the scottish socialist tea party” and we made our mission to throw candy at all the children watching the parade.

i had seen this done in another parade in the midwest while traveling cross-country with my mother when i was little and i’d always been pissed that our town parade did not include this sugar-centric element.

we joined the parade right after the shriners and before some boy scouts, slipping in nonchalantly, hoping we’d be good for a least a half mile before the cops kicked us out.
and that’s about how long we lasted. we managed to throw a good amount of candy to the children, who were confused as to what to do. this was 1993 – parents were already convinced the world was out to poison their young.

once they kicked us out of the parade, we handed out the last of our candy to some lucky little tykes and we went off to a hill at a local nunnery to get stoned.

legend was that you could get stoned there on the hill, where the freaks and misfits of lexington would gather by the hundreds every patriots day, without the cops bothering us. who knew if this was true or not, but everybody believed it, and belief creates worlds, so we all would gather on this hill, pass around bongs in the open, and watch the parade go by, thinking we were immune to the law.

rumor had it that the nuns in the nunnery had made a pact with the hells angels. apparently the hells angels started the original encampment in collaboration with the nuns, and had threatened the local police department that they would crash the parade and disturb the peace (and kill the nuns?) if the kids couldn’t get stoned in peace. and there WERE some hells angels there, i think. neil’s theory is that the cops were just glad to have the stoners and troublemakers all on one easily monitored hill while the parade kept them busy. i like the other story better.

i love what i believed when i was a teenager.

being a teenager was so fucked.

speaking of which, it’s the twelve year anniversary of columbine today.

on april 20, 1999, 15 students died in a tragedy fueled by a set of circumstances still not fully untangle-able.

on saturday night, neil and i went to see “columbinus”, a play that was unapologetically censored by my alma mater, lexington high school, and instead found it’s home on a professional stage, since the huntington theater got hip to the cancellation. i’ve been blogging about it. read the first of ‘em, here.

i was proud of all of them.

the play somewhat of a documentary….it drew on actual interviews, diary entries, IM sessions between eric harris and dylan klebold, and eyewitness accounts from the students during the shooting.

during the play we listened to the recording of a teachers call to 911, which was replayed over 3 agonizing minutes while action slowed to a crawl on stage – leaving time for the gravity of the moment to sink like a stone.

you could hear people all over the theater, weeping in their seats, stifling sobs.

this is something we do together. this is what theater does, what it’s for. catharsis.

we’ve been doing it for thousands of years.

and the play was tragic, but i don’t think i would have wept after the show if it didn’t all hit me like a ton of bricks:
bogart is leaving the high school, an era is over, and the administration is clamping down on the creativity that once gave me my safe creative haven.

after everything we’ve learned….really?
really, shut the kids up?
shut them up for trying to tackle real art? for trying to say real things?
really, try to stop them from making art that doesn’t apologize and pander, art that swears, art that’s dark and mean and reflects like a jagged mirror?
really clamp your hand over their mouths when they decide to put on a play about the things that are ACTUALLY meaningful to them?

marilyn manson said, when asked by michael moore in (“Bowling for Columbine”) what he would say to eric harris and dylan klebold if he’d had the chance to talk to them:

“I wouldn’t say a single word. I would listen to what they have to say, and that’s what no one did.”

do not stop listening.

if you don’t listen, they notice.

if you don’t listen, they get angry.

if you don’t listen, they turn the darkness inside out.

eventually, if you don’t listen, they shoot at you.

listen.
everywhere.
all the time.

until you fall dead in the ground, until your fingers fall off and your head hurts:
give the darkness an airtime, a venue, a canvas.

you will hear what you what you need to hear.

do not fire unless fired upon

but if they mean to have a war….

it’s going to get ugly. 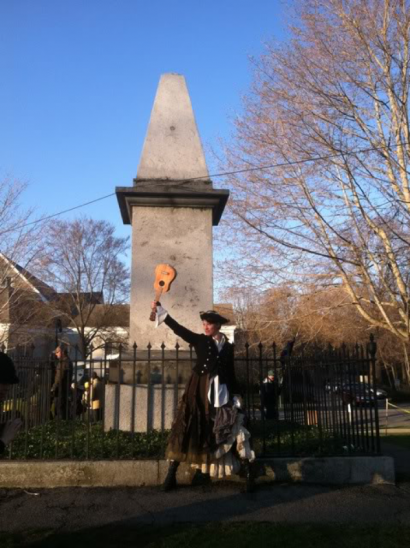 p.s. that last photo by ryan anas. thanks for coming, ryan.