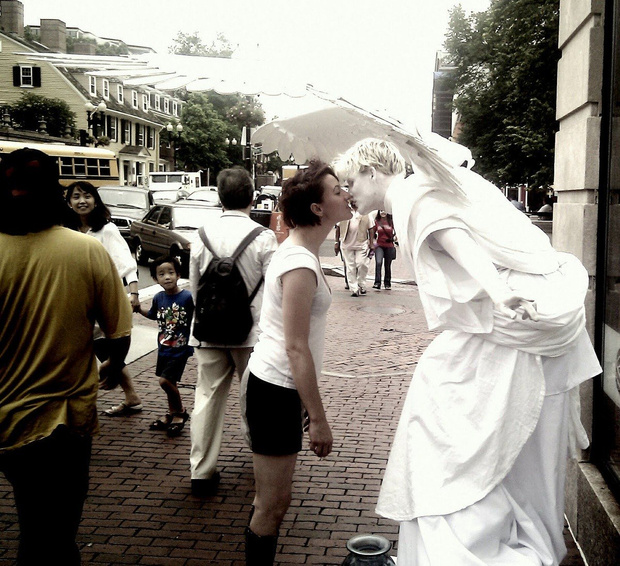 on being in an indie power couple

greetings from the london coffee shop and before i get to my actual work today, i just had to share this. today is a half-admin day then an ash day, then i head to newcastle for my last UK show til london. 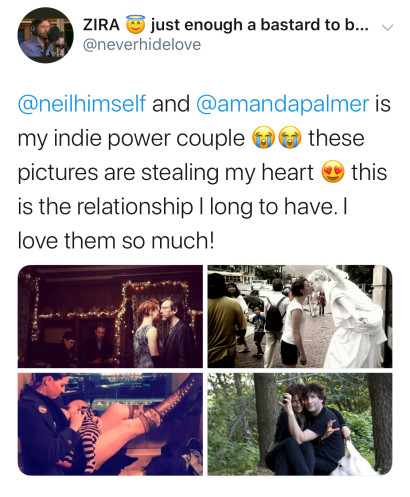 this mistake is hilarious and also profound: the other three pictures of me and neil are adorable. this one: 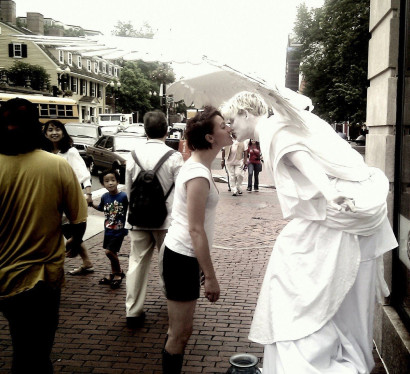 ….which made me swoon, oh i miss those old harvard square days….

…. this photo isn’t of me and neil. this is vlake brasher (yes that blake), a fellow living-statue and erstwhile paramour of mine from way back in the day.

this photo is probably from around 2000/2001, just as the dresden dolls were starting and many many years before i met neil.

but the indie power couple phrase is the thing that stuck. blake and i were – and are – both passionate artists. blake’s artwork and paintings were one of the main reasons i found him so beautiful (you should go see his art, it’s abstract and breathtaking: https://www.blakebrasher.org 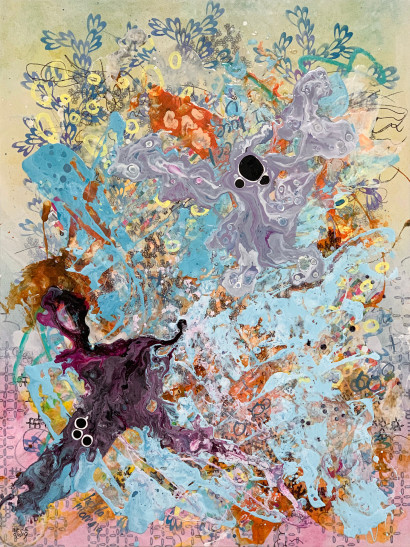 blake and i danced through a period of life together and acted as each other’s muses, for better or worse. better, i think.

if a power couple is a power that has power, we had it. wielded well? who knows. i inspired blake to be a living statue and he inspired a song i wrote (“blake says”, from who killed amanda palmer).

tandems. brian and i were also an indie power couple – even though we weren’t a “couple.“.

journalists used to ask us

and our stock answer was

“yeah, a couple of freaks.” 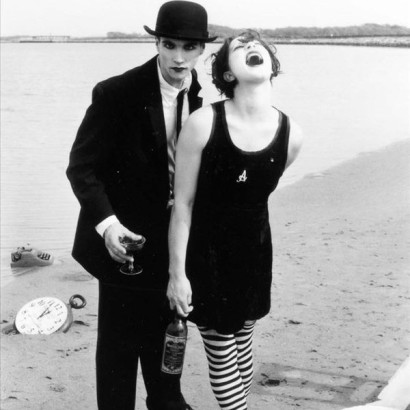 (2001, probably taken – by lisa gordon – within weeks of that photo with blake)

when we tour as the dresden dolls, we create 10000x more fucking power than either of us is ever capable of conjuring on our own. anyone who has seen us do our dresden dolls Thing knows this.

same with me and jason webley. we indie-power-couple at will.

and when we work together on moving images, me and michael pope.

we become an indie power couple to be reckoned with when we work alongside one another.

while i was touring through ireland i felt like i was half of an indie power couple with róisín ingle, and when i was making the drowning in the sound video, i felt indie-power-coupled with coco karol.

artists are like weird magnets, we attract each other with our passion-brains and sometimes we link up and tandem, creating greater forces than we could ever create ourselves. it’s like some scientific formula. you put us together and there’s a chemical exponential explosion.

sometimes people ask me if i would ever “collaborate” with neil and i answer: have you seen the baby we made together?

that kid and our marriage have been the ultimate collab. 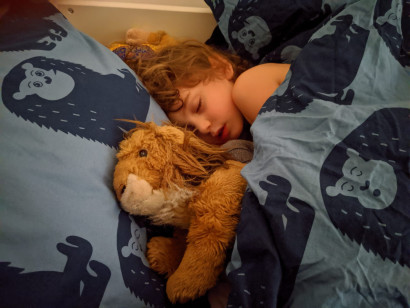 to all my artists out there – may you have thousands of indie-power-partnerships through your life …. and may it never be boring.

definitions of love and couple-dom in our society are punishingly narrow and closed. for everyone i know in a “normal“ marriage or relationship, i know someone who is in an artistic or otherwise-collaborative brain-soul-love-affair with An Other.

neil has had it…with dave mckean (who made art for sandman), with the director douglas mackinnon (who became his indie-power-art-husband during good omens) and on and on.

i know this is normal. and it’s not just in art.

i would love to remind us all that love and art and making and being-together in this life is so much more gigantic than we remember to remember.

if you have a good indie-power-couple story, go ahead, share it.

ps. if you want to just see those adorable twittered photos  of me and my babydaddy, just to make this fair (see last post), here’s all the pictures of me and neil canoodling that the accidental-tweeter put up.

we are really not a bad looking-couple, gotta say.

we have been together ten years, me and this weirdo writer. the mysteries still abound and some days it feels like we barely know each other and are starting from scratch and clawing our way to balance and understanding. but we are pretty goddamn committed to making this fever dream work. thanks for inspiring this whole thread on twitter, zira (and let’s just take a moment to worship at your twitter handle: neverhidelove). poetry abounds. 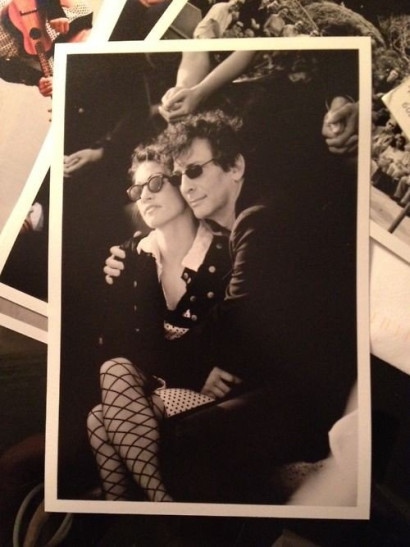 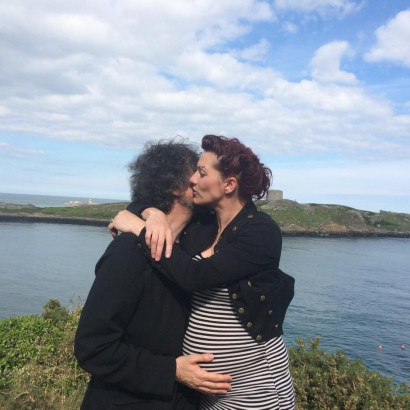 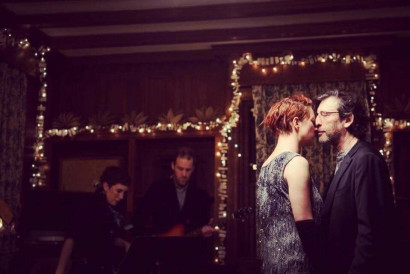 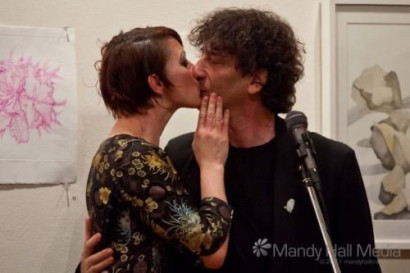 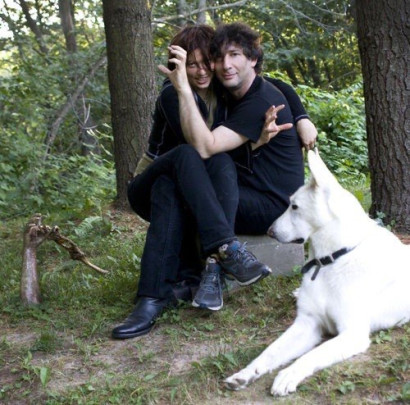 the power of the power failure. (and the first song is….) {official thing}

using you to spread the love to indie bookstores, and GO!