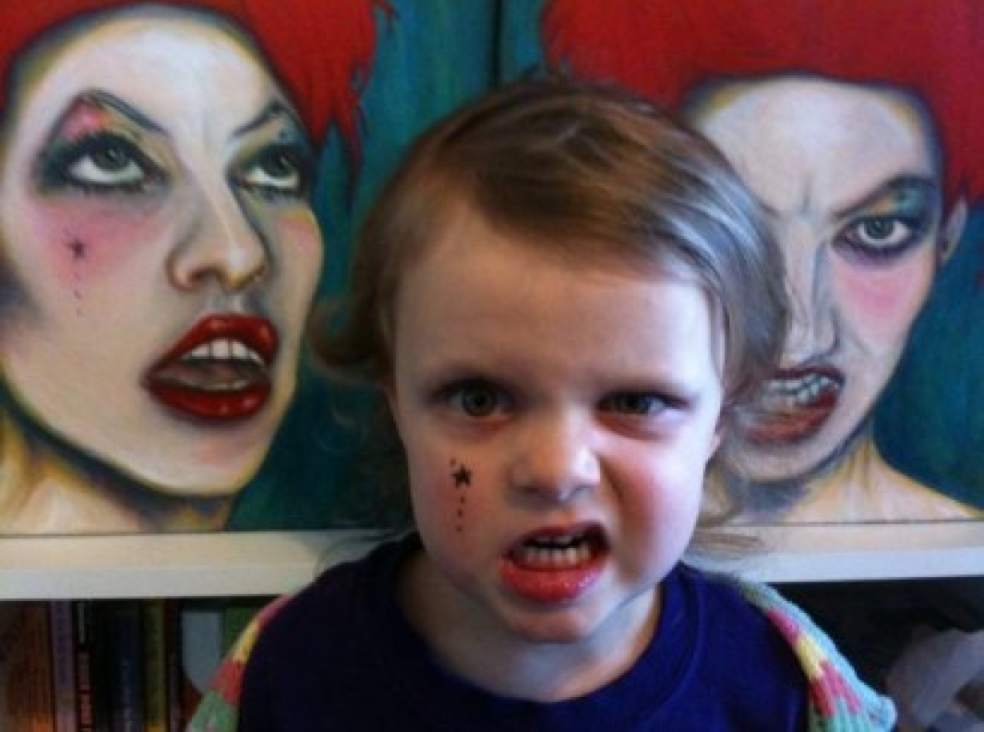 how all my baby daddies die in the surf

neil and i have been at his freinds jonathan & jane’s house in florida, taking what we call a working vacation.
i was going to be home anyway, digging out and dealing, and home is freezing. so we came here, where it’s warm and there’s an empty house.
i twittered for a piano and was graciously lent one by a nice man, @johnnydiggz. thanks, @johnnydiggz. i have an orlando show day after tomorrow.
it’s sold out (woo).

i’m preparing.
the pops is going to be one of my ambitious shows to date and it’s driving me crazy. i can’t believe what i’m trying to be doing. oh well.
sometimes i wonder if i’m crazy to be practicing tchaikovsky for hours a day just for a few minutes of pay-off.
what the fuck am i trying to prove here, anyway? i dunno. i’m random. i decided, so i’m doing it.

we’ve been sticking to a general daily schedule which involves a lot of emailing, phone calling, writing, tea-making, piano practicing and cooking.

well, neil does the cooking. i do the dishes and try to look grateful. 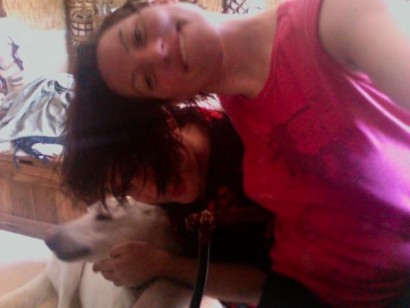 neil holds the dogs head and cleverly hides behind my hair.

i’m working hard.
i’m writing songs.
i’m happy.
my brain has been wandering a lot.
i’ve been doing a lot of internal and external housekeeping.

my brain is trying to sort through many things at once and exhausting itself.
big life. small life. business decisions. personal shit.
this is THAT moment where i’ve said: “when i have time, i’ll….”
this is time.
what am i doing?
it’s always interesting to see what i do when the time becomes real.
it’s never what i thought it was going to be.
i try not to stick to any plans. 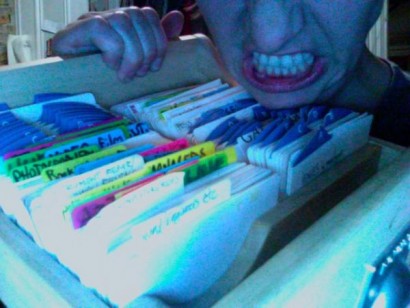 ….and pulled all the cards out in the sun.

it was a snapshot of my life in 2004, a laundry list of radio people, managers, lawyers, newspaper writers, photographers, college booking agents, promotors.
back when i was single-handedly running the dresden dolls empire without an agent, a manager or any help. just me and brian in the kitchen, burning CDS.
i don’t need these cards anymore, and the contacts i need, i have somewhere already.

the rolodex has just been sitting there under piles of shite in my bedroom for years. it was time.

most of them i threw away, some i saved to put on my mac.
the rejects we burned on a log in the fire tonight while we ate our dinner (neil made pasta with shrimp).

it was fun to watch all the business cards from roadrunner records employees go up in brilliant flames.
no malice.
just. over. it. and….please god let the reign of terror end gently. i keep waiting. wanting to be totally free, not quite getting there. 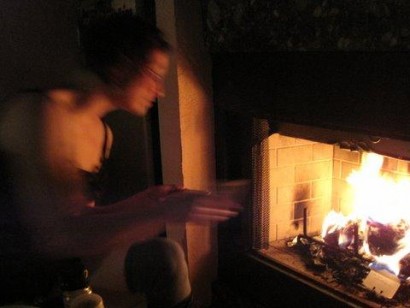 i put my feet through the sand this morning before i started emailing and practicing and i looked at the man i love.

he was walking a white dog.

we started talking.
he said hi.
and asked my name.
and i told him it was candy and that i had 7 kids and was a day-shift stripper at the place down the street called “bare assets” that he probably drove by but didn’t notice.
and what did he do for a living?
oh? what kind of writer? screenplays eh? you much be really famous then, if they’re making a movie out of some book you wrote.
so, you like kids?
i told him about how my first three baby daddies had died; one suicide (pills), one in iraq, one was shot by my brother (it wasn’t just my fault, there was a shoddy drug deal involved too).
he was curious. we talked for about a half hour. he told me about being alone in a big house. then i told him my real name (jordana).
then i went back to being his girlfriend.
we do that.
i really like him.

speaking of mr. man, there’s finally news about the short film we made together, called “statuesque”
i acted in it along with Bill Nighy, my friends Becca Rosenthal (aka @becca_darling) and Emilie Bera,
who you may remember from the dresden dolls’ paradise DVD.
mr. neil gaiman wrote and directed.

it’s a silnet film; the music was done by our friend sxip shirey, who lots of you know.

from the producer, hilary:
The series of eleven films starts to broadcast on Monday 21st December and goes out one a night up to and including the 31st December at 22:00 each night.  The first film is a fairytale with Tim Spall and Natascha McElhone, the films are all very different – ranging from Mackenzie Crook and Lindsey Marshal in a slapstick comedy to a story set in a war zone by William Boyd and directed by Richard Eyre  to one about a dog alone at St Pancras Station on Christmas Eve searching for a friend to one about eternal love…
here’s an ARTICLE about it:
http://screencrave.com/2009-09-04/bill-nighy-amanda-palmer-silent-statuesque-neil-gaiman/

and here’s a shot i forgot about, of me and neil on the set at night: 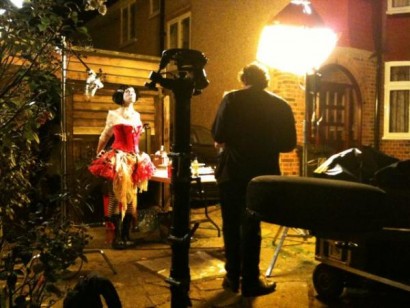 we’ll also be showing the film at the NEW YEARS SHOW (get tickets, for christs sake) and michael pope is also going to be showing two new films he’s creating just for the night: one is to accompany one of my selections for the orchestra (bjork’s overture from selmasongs/dancer in the dark) and one for the countdown. i’m so fucking excited.

the opening acts will be local throwbacks miss tess, april smith, and mr. sxip shirey himself.

p.s. if you don’t know what to buy people for christmas, i’ll tell you. AMANDA PALMER AND DRESDEN DOLLS MERCHANDISE. lots of specials going on: HERE.

p.p.s. nothing can say it better than this can.
the artist who painted painting behind the child terror, eleaonor phillips, sent it in.
god damn, i can’t wait to meet this girl when she’s like 12. 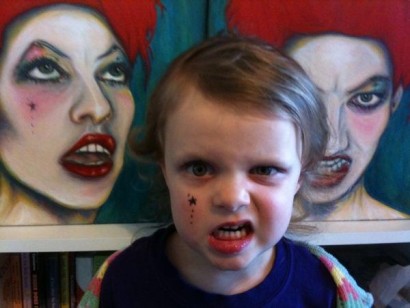 No, I Am Not Crowdfunding This Baby (an open letter to a worried fan)