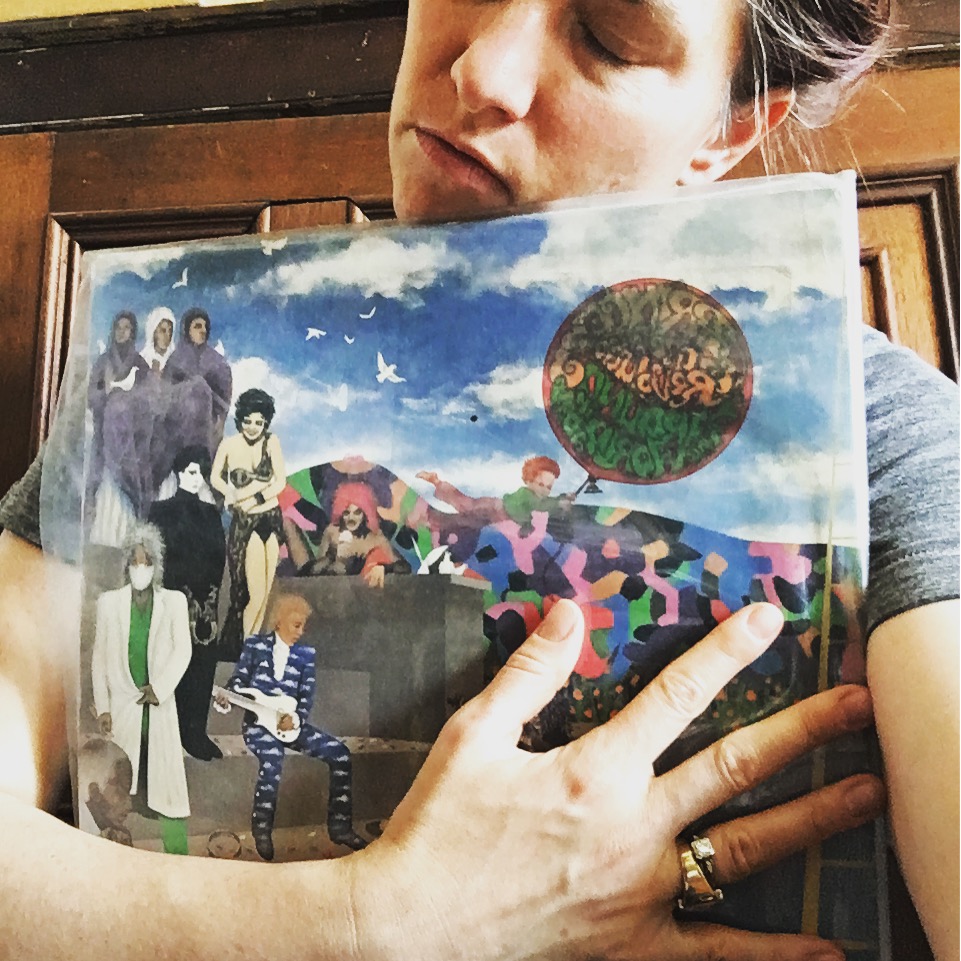 We are gathered here today

To get through this thing called

It means forever (and that’s a mighty long time)

But I’m here to tell you…

A world of never ending happiness…

You can always see the sun, day or night.

So when you call up that shrink in Beverly Hills (You know the one, “Dr. Everything’ll Be Alright”)…

‘Cause in this life?

Things are much harder than in the after world.

You’re on your own

And if the elevator tries to bring you down?

…it’s not so much our heroes dying as the idea that they’re dying en masse. between lou reed and bowie and prince that’s a large chunk of my teenage tape collection.

I’ve had love affairs in my mind with so many rock stars – prince was my first.

he was the one I hung at the altar on top of my bed. my BUNK bed.

I was 10 or 11 when I bought my first cassette tape. it was “purple rain”…however it came to be that I knew about prince (the radio? MTV? my older brother Karl?), I knew that he was for ME. mine. my sister could have U2. prince was mine mine mine.

I used to ritualistically kiss the poster above the bed before sleeping. someday, I swore, I would marry this man. purple rain was played day and night, my first personal soundtrack record…because unlike the Beatles and doors records I was into, I took this one with me in my Walkman. prince sang me to school, he sang me to bed, he sang to me on long boring car trips to places I didn’t want to go, he sang to me on school bus trips, he sang me sitting and standing and walking and sleeping. that voice. I also made up dance routines for almost every song on that album (and there isn’t a bad song on the album) in the living room. I took the boom box to the piano and taught myself how to play the song “purple rain” itself. I rented the VHS of the movie. often.

the next year, or maybe two years later, was when I bought “around the world in a day”, on vinyl….at MusicLand in the Burlington Mall if I remember correctly. I didn’t know any of the tracks, I just trusted prince.

this album was so BIZARRE – but that’s how it was back then…you bought an album and you committed to it, no matter how freaky the tracks were. you stuck with your artist. I stuck with him and even though there wasn’t a single song like “America”, “tambourine” “around the world in a  day” and “condition of the heart” (with those fabulous jazz chords that made me feel so sophisticated)…I just owned the love of Anything Prince. I drew pictures of “paisley park”. it was, in my head, a real place. some kind of sci-fi afterlife, or artists colony. I wasn’t sure…but I wanted in. and there was “raspberry beret”…with hooks and strings so sweet I wanted to eat them.

there were other albums, earlier and later, but these two were life-soundtrack moments (so much that, as some of you know because you were THERE, my band covered the entirety of “purple rain” on New Year’s Eve at terminal 5, http://www.undertheradarmag.com/news/amanda_palmer_to_cover_princes_purple_rain_at_new_years_eve_show/)…the picture of my early sonic life isn’t complete without the bold early ingredient of Prince. he changed genre on every song, he sang about things in alien poetic language, he dressed up, entertained, rocked, posed, played the part of the ultimate rock star.

but I never felt connected to him when I got older. he seemed truly alien by the time I was adult. faraway, strange and sad to me from my distant life as a little emotional punk. locked on a hill, he didn’t seem human, and he seemed to want it that way.

journalists used to ask about my early influences and I would talk about the beach boys and Beatles and doors and the later influences like the cure and nick cave…but I would refer to the “holy trinity of the eighties”: Prince. Madonna. Michael Jackson. they were, in my mind, of a piece, on an special altar of gold and purple and splattered 80s neon paint….but none of them seemed human or reachable. none of them acted like they WANTED to seem reachable. they were stars. up there. far. superstars. above.

madonna, you’re the only one left…a lone bedazzled icon statue in a crumbling holy trinity, surrounded by the glittering and flickering ghosts of your two brothers. I hope the fates pass over you for a while.

the morning today started beautifully – 70, sun blazing, my heart was bursting and the babies were singing. he’s still fine, but the day chipped away, piece by piece, this news coming first, then more strange news from every side, pain coming in from all angles. i am lucky to have my friends by my side. pope is in town, and when a friend came by tonight needing some emotional help, and my quilts were all in the wash (I’m cleaning!!!) I ran up to lee’s, to see if he had a blanket handy, in case said friend needed to rest in my loft. lee came back from his bedroom offering a royal purple satin blanket.

prince was watching over us all.

I put on “around the world in a day” and thought about pop life. (we’ve all got a space to fill).

a few people on Twitter asked if Jherek and I would do another tribute, like the Bowie one. there’s one part of me that desparately wants to (I was more a prince fan than a Bowie fan, for sure) so that I can again channel this weird void-like sadness and need for communing into something concrete … another part of me feels like it’s just too much. like we would start to feel like stringed vultures on the dead of the 80s and maybe we should just Leave Things Be.

I do know I am hearing purple rain in my head, and in my heart, tonight.

“There is a park that is known

4 the face it attracts

On 1 side is swept back

The smile on their faces

It speaks of profound inner peace

The girl on the seesaw is laughing

4 love is the color

Admission is easy, just say U

Believe and come 2 this

Place in your heart

Paisley Park is in your heart”

I’ve been searching, lately, for a place to live. Anthony’s death hijacked the plan and the wiring and then pregnancy and birth stole the whee and gearshift. now I have a child in my lap and I’m moving slowly – but  I am still on the profound hunt for a safe place to land.

I’m starting to think I might have to create it in places I never thought of before.

in song, on stage, internally, in communion with you, and the search may be long and hard, which it always has been. maybe it’s meant to be like that. maybe the search is the destination.

maybe, especially as musicians and poets, we are cursed by our vision of unattainable utopia – we can try to build it, but it’ll never approach the conditions of the one we see on our heads.

I’ve heard that paisley park, the actual edifice Prince built in Minnesota, looks like an IKEA.

I find it with my friends. I find it with you. the buildings surrounding me become less and less important – and today was a reminder that all containers are temporary. all of them.

And you… I love you guys. don’t forget how very mortal, connected and temporary we all are.

a purple kiss on all your heads.