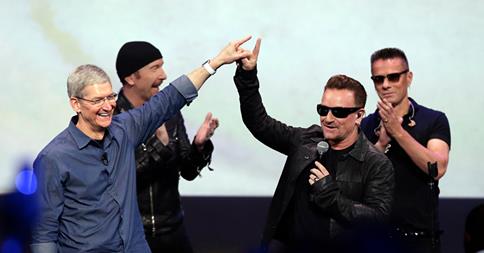 about the thing that U2 just did with apple: an amanda and bono and everybody story.

“Bono, U2’s lead singer, alluded to the deal himself at Apple’s event. After the band performed, he and Mr. Cook playfully negotiated over how the album could be released through iTunes “in five seconds.” Mr. Cook said it could if the album was given away free.

‘But first you would have to pay for it,’ Bono said, ‘because we’re not going in for the free music around here.’

Mr. Oseary, who took over management of the band less than a year ago, stressed in a phone interview after the event that the music still had value even though it was being given away.” – via the NY times


from the department of amanda & bono. it doesn’t feel like a cosmic coincidence that U2 is giving away content for (sorta) free at the same time we’re battling for net neutrality, (nor that, woohoo!, bono blurbed my new book, which was a really nice thing for him to do).

lots of people have asked my thoughts about U2’s deal with apple. if you missed the news: anybody with iTunes was delivered the new U2 record for (surprise!) free, and anybody who buys the new line of apple products will get a copy.

there is no U2 versus me versus anybody here – all it does is keep underlining the same question over and over and over again. THE MONEY and the SUPPORT has to come from somewhere. there is no such thing as truly free.

i was lucky enough to meet bono at TED. we had a nice beer together. he’d wanted to meet me. i felt honored. i love U2, they were one of my early bands (even though my sister mostly usurped them).  we went to a bar and got guinnesses. it’s weird, being around someone that famous. it made me scared to be any more famous than i already am. every person in the room always wants to be next to you. that would be a hard job to always have.

we talked a lot about these sorts of things. he didn’t get why i was encouraging the idea of digital music being free.

i was like: dude, i’m me. you’re in U2. you’ve been able to make tons of money for decades on physical sales. i haven’t, ever. i didn’t have anything to lose.

robert smith (another hero) once said something similar. that digital was destroying their lives and livelihoods. well…YEAH. The Cure’s CDs sales have probably been steadily nosediving for years. and they have retirement to think about. where will the money come from? they were expecting things to stay the same, and sadly, they haven’t.

these guys have had their system smashed, fucked, broken, with no obvious solution to repair it. i never had any expectations….because we never made tons of money records. the dolls got one giant advance from our first label, and that was it. most of our money came from merch (which included, by the way, records we sold at gigs for $15, for which the label would charge us $10), ticket sales, and creative ways of getting our fans to help and support us. that was it. it was the ecosystem in which we were raised.

now we’re all trying to figure out what to do, how to make money, how much we can trust the public to care about our art and help us find a system that works so that we can get paid for making music for people.

trent reznor got off a label, tried a bunch of shit, and went back on.

even thom yorke has come out and said he somewhat regrets the pay-what-you-want thing radiohead did because it harmed the ecosystem.

some artists will be able to get apple to pay them a ton of money so they can make content, some artists will try to go to their fans, with eyes clenched shut, praying that the goodwill of having given away free content will ignite their crowd’s generosity, some will strike deals with labels and other companies who can give them capital and share their revenue, some will borrow money from their parents, some will plaster their faces on any commercial service possible and collect money from coke, pepsi and exxon to make sure their music provides them a paycheck.

RADIOHEAD; U2; KATY PERRY; METALLICA; BEYONCÉ; AMANDA PALMER; NINE INCH NAILS; AND YES, GENE SIMMONS; CAN ALL DO WHATEVER WE WANT.

THIS IS WHY WE WANTED TO BE ARTISTS IN THE FIRST PLACE. WE DONT LIKE BEING TOLD WHAT TO DO.

so before you go making fun of U2, or katy perry, or NIN, or prince, or anybody, for the delivery system they are using….before you judge, consider. who’s got it 100% right? what’s the perfect system? clue: there isn’t one. not even a little.

if i’ve said it once i’ve said it a gazillion times, and come to think of it, i actually deleted this section out of the book, goddammit. but i’ll say it here: let the artist decide…..only the artist knows what works for the artist and what the artist can live with.

and if you’ve got a problem with it, as with this net neutrality thing, use your voice.

instead of trashing the artists you don’t agree with, use that energy support the artists you love. there’s only so much time and energy and money and we’re all going to die anyway.

p.s. again, the link to the times‘ piece.

an open letter to washington about SOPA (from amanda palmer, trent reznor, the lonely island & others)