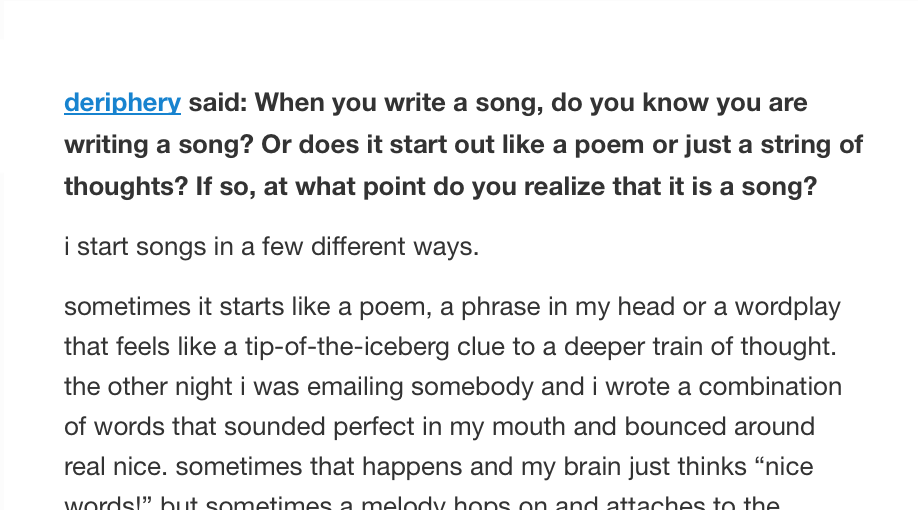 over on my tumblr, deriphery asked: When you write a song, do you know you are writing a song? Or does it start out like a poem or just a string of thoughts? If so, at what point do you realize that it is a song?
(and yes, you can ask amanda o’er there)

i start songs in a few different ways.

sometimes it starts like a poem, a phrase in my head or a wordplay that feels like a tip-of-the-iceberg clue to a deeper train of thought. the other night i was emailing somebody and i wrote a combination of words that sounded perfect in my mouth and bounced around real nice. sometimes that happens and my brain just thinks “nice words!” but sometimes a melody hops on and attaches to the words, like a parasite. that’s usually when i feel irritated about having to be disciplined and grab the voice recorder on my iphone or email the starting lyrics to myself so I don’t forget them. if i’m being good, i’ll go straight to an instrument (piano or ukulele, whatever’s on hand) and see what happens with the the little word/music creature hopping around in my head. and if i’m being REALLY REALLY good i’ll hack away at it using nonsense filler lyrics until there’s a shape, a loose draft of a song with sections, but more important, a feeling. if i get a song 60% done or so in one sitting i know it’s got a decent chance of surviving. even then, I’d say 9 out of 10 songs that I start don’t get finished. unused to really stress about that and finally let myself off the hook.

so that’s the most common way. “coin-operated boy”, “lost”, “mrs.o”…most of my songs were written this way.

another thing that happens is that i pick up an instrument and noodle around and find a really nice chord progression, or i’m walking down the street and a melody pops into my head, and i stash it in my memory bank. and it stays there until some poetic words come along and cozy up to them. this is less common and the results are often weird and the lyrics more vague and esoteric. “gravity”, “necessary evil” (which is one of those songs that i hacked away at and changed lyrics on several times over the course of a few years, even re-writing verses in the studio while i was tracking it), and “bottomfeeder” were written this way.

the last way i start a song (and there are very few like this) is that i get a conceptual idea in my head without specific lyrics and i sit down at the instrument, turn the feeling/ idea around in my head and just fuck around until something clicks. these are like “purpose-built” songs. “sing” is one of those (i wanted a song about the topic but didn’t know exactly how to say it), “dear old house” (which is finally about to get officially released on the “evening with” album with neil – was written the night i got the email from my mother, was written as a goodbye letter that i knew i had to write right then or the emotions would never be as strong), and “the bed song” (which was an anecdote told to me by neil and i thought “holy shit that’s the saddest thing i’ve ever heard…i’m using that in a song”) were all written that way.

i do pretty try hard not to think about HOW in do things while i’m doing them, it kind of destroys the mystery and magic (where ARE these words coming from? i have no idea sometimes) and the best advice i can give a songwriter is to let yourself write bad lyrics and use simple chords while you’re in the fever of writing…nobody has to hear this shit, and you can go back and prune. it’s like sculpting…you get the thing into the basic shape and then hammer away at the finer details.

i’ll often get stuck on a single lyric or line and know that there’s a better/deeper/less clichéd way of saying it and literally take the lyric for a walk around the block, chewing on what works and doesn’t work. sometimes i come up dry. and sometimes i’ll wake up in the morning and it’ll be waiting for me, all nicely laid out and probably subconsciously constructed into dreams.

i keep a pen and paper by the bed.

one thing that’s so inspiring about listening to other songwriters is that you can expand your palette just be being reminded where the edges don’t stop. you can say ANYTHING. you can write ANYTHING. there are no rules, no systems, no boundaries you have to draw within. i remember hearing all these artists at one time or another:
• robyn hitchcock
• liz phair
• guided by voices
• edward ka-spel
• nick drake
• lou reed/velvet underground
• elliott smith
• regina spektor
• peter jefferies
• john cage
• lamont young
• david tibet/current 93
• belle and sebastian
• neutral milk hotel
(and the list goes on…)

and thinking “holy shit – i didn’t know you could DO THAT”.

and every time another songwriter knocks down a wall for you, your playing field just gets bigger.

it’s also good to remember that even your FINISHED songs don’t have to be good. i wrote dozens and dozens of songs in my teens and twenties, that i finished, that just aren’t that good and that probably nobody will ever hear. i consider them all broken eggs that had to go into the omelette of the songwriter i became. letting yourself be imperfect and writing shit you know is shit is a good way to practice getting good. but our inner critics are so busy yelling “THIS IS SHIT! THIS IS SHIT!” that we have to simultaneously exercise the muscle of ignoring that critic and learn to tell back “I KNOW SHUT THE FUCK UP i’m DOING IT ANYWAY.”

while i’m rambling, a note about keys and stuff: i change the keys of the songs i write about half the time. the key that the song is written in – or arrives in inside my head – is often no match for my vocal range. or the song just doesn’t sound good sung that low, or that high. i often write songs i can barely sing and sing them anyway (there a countless examples of this, especially from the new record). i’m not afraid to sound rough, i’d rather deliver the song myself and sound rough than sell the song to someone who can deliver it with a clean vocal. i am greedy that way…and i lose my voice approximately once per tour because of this stupid decision. (see the recent footage of “st kilda to fitzroy” from the last night of the australian tour…i’m BARELY hanging on there and my voice is pitchy as hell and cracking all over the place. but i still think it works because i’m me.)

someone asked about delilah.

The Epic TED Blog, part one: It Takes a Village to Write a TED Talk.

SKETCHES FOR THE MUSICAL JIB, a batch of new songs by jason webley & AFP.