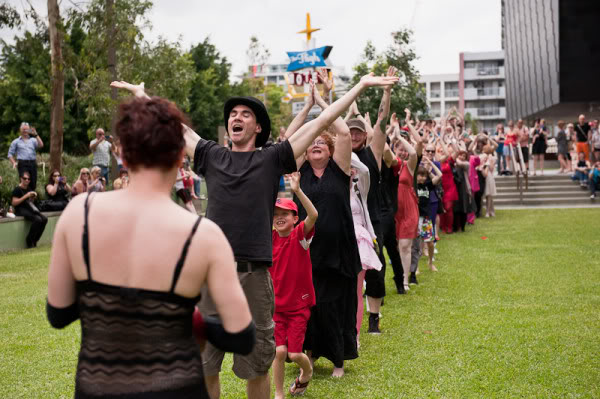 some exciting news for you before the blog…

our friends at moshcam are webcasting the show TONIGHT in high-quality-multi-camera-glory…find out what time it starts for YOU (wherever in the world you are) HERE, RSVP on facebook HERE, tell your friends to watch with you, tune in at partyontheinternet.com and we shall see you all on the internetz…or, well, you’ll see us.

(be warned, the player might not work on mobile devices/tablets/etc so try and get to a computer ASAP)

thursday night in brisbane was the first night of the australian dresden dolls tour.

i went into one of those AHHH I’M FINALLY ALONE youtube/internet holes i often find myself rapidly jetting down when i have my nights back to myself, cuddle-free, post-neil. useful, isn’t it?

all that wiki-ing MUST BE GOOD FOR ME SOMEHOW. maybe it is.

the internet can poison you. but then provide the cure. watch.

i stumbled upon something totally unexpected that wound up jerking me around – the way it tends to. there was a thread i hadn’t noticed before on the band forum with a full 29 pages of discussion, so i clicked on it. i don’t post on (or read) the forum as much as i used to…i used to post daily. i still go there from time to time to share news or see how everybody’s getting on but twitter has become a much more immediate place to connect with folks, and the forum seems to have become its own self-sustaining community.

the thread was called “I hate Amanda”. as i read it i found myself being forced to examine, with fascination, along with a few dozen fans, the last 3 years of my life and career. all my choices and how they have and haven’t sat well with people. everything from my ukulele playing to going independent and constantly trying to raise capital via merchandising….all of it.
i forget that people have opinions sometimes. i think it’s a very good thing, that forgetting. the opinions are good, no doubt, even the negative ones…without them the fanbase would be an intolerable mass of sycophants, instead of a bunch of smart, funny people that i genuinely love most of the time.

the girl who posted it was complaining about how she misses the old incarnation of amanda, how she hates the ukulele, how she’s lost her connection, how she doesn’t like my choices.
i watched myself, my projects, my business choices, my social skills….my life being academically discussed and batted around, defended by many, examined like a phenomenon. i’m always impressed, i have to admit, by the extreme intelligence and sheer civility of these fights on the board. there are multiple voices of reason who keep the debate relatively grown-up and on track, and people who simply whine end up looking like whiners, while everybody else engages in spirited batty-aroundy-dialogue. i’m always very proud of the people who write there. they’re smart.

it was important to me that this girl wasn’t a troll from out of nowhere, posting that i was an evil scientologist gorgon (those people do exists, and they’re very, very easy to ignore), she was a long-time fan who just isn’t into me anymore. there’s been a lot of these people. i’ve changed. my music used to be angst and piano-driven, and i’ve spent the better part of a few years traipsing around writing three-chord songs on the ukulele.

but that’s what i’ve wanted to do.

if you’re famous: i advise you to never read these fucking discussions. in the words of my best friend and mentor: don’t be like me. i’d (ironically) JUST been having the dont-read-the-critics-discussion with neil. for certain kinds of information, it can be wonderful and connecting, but it’s far too easy to fall down the bottomless pit of your own mirrored ego. anyway….i didn’t read all 29 pages, just skimmed. but it was enough to irk me.

it’s funny: sometimes i forget that people are judging me. most of the time i’m so fucking high on my own ideas and impulses that i forget someone might disagree with a single one of them.

this is, i think, the only way to ever move forward.

this is, i think, the only way to make art.

not good art. not bad art….

i always feel lost as an artist.
i actually have come, in a twisted way, to enjoy the lostness. sometimes, even, to enjoy the criticism. more and more i get that the criticism is a very real and important part of the story.
for every and any choice i make, there are a million i don’t make.

do i make the choices to … make people happy? to make money? to stroke my own ego, or have it stroked by others?

to fill some deep inner need to make art for no reason?

well….all of these, actually. in some impossible-to-measure combination.

you have to work without critics in your head. otherwise you turn into a pleaser.
which is boring to be. and boring to watch.
i know that, deeply. to the core.

it didn’t matter.
i was irritated with myself for letting the hungry ghosts of other peoples egos penetrate my night.
i went to bed feeling soul-poisoned and grumpy and wishing i hadn’t read the argument.
tomorrow was the first night of our tour, and i was feeling knocked off center.

i was in a terrible mood as i drifted off the sleep, and woke feeling icky and distorted.

the day before, zea barker send me a link the day before the brisbane show, about an installation in the Brisbane Gallery of Modern Art.

the japanese artist yayoi kusama, known for her obsessive polka-dotted works, had set up a blank white room…. 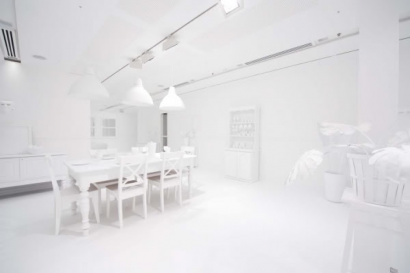 …and let children loose in it, with stickers. 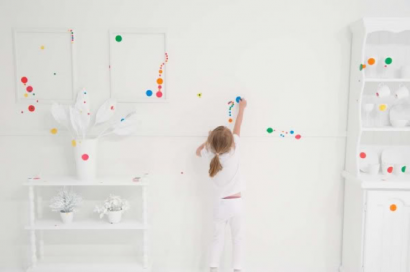 ….and it was opened to the public, who HAD AT IT. soon it was this: 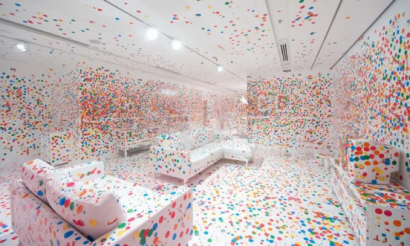 i was entranced. i shared the link on twitter and immediately someone at the museum named dan tweeted me back, telling me they’d be happy if i stopped by.
i sent him a direct message: can i invite people and play ukulele? he replied: absolutely.

and a ninja gig was born for 1 pm the next day. BAM.

sean (my secret blog-poster and internet-helper) wisely suggested that we ask everybody to wear solid colors if possible (hi-five sean) and i tried to rustle up something white. someone on twitter offered to bring some white thigh-highs.

it was the night before, and i’d just gone down the stupid i hate amanda late-night ego-hole, i lay in bed, reading up on yayoi. this is where the hole can take you beyond the ego-trench and into a land of beauty.

yayoi has been making art since the 60s and is considered a pioneer of performance art (lots of naked) and conceptual art.
she’s struggled with mental health issues from a young age, and her polka-dotted theme is pulled from the dots she would see when she had obsessive visions.

she calls the dots “infinity nets,” and says they are taken directly from her own hallucinations. she says:
“…a polka-dot has the form of the sun, which is a symbol of the energy of the whole world and our living life, and also the form of the moon, which is calm. Round, soft, colorful, senseless and unknowing. Polka-dots become movement… Polka dots are a way to infinity”. (from her wiki)

and she lives, by choice, in a mental institution, and walks down the street to her studio.

“if it were not for art, i would have killed myself a long time ago”.

art, and artists choices, are all subject to criticism.

but we must, as artists, we must never, ever listen.

you listen to the critics: you die.

outside the museum….brian leading the ninja crowd in a game of RHUMBA SIMON SAYS: 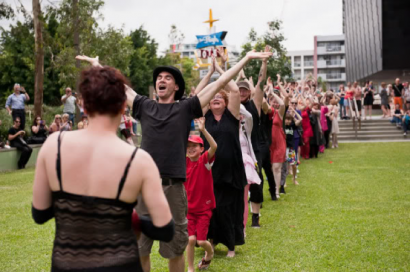 me singing “amazing grace” with my friend gypsy on slide guitar….. 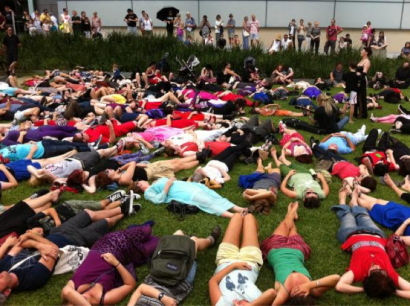 (this and the next few photos by dragonkatprincess) 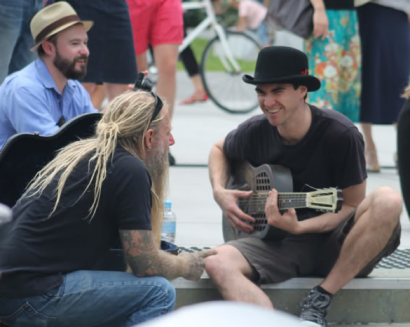 and a few more… 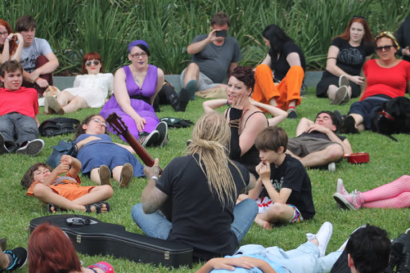 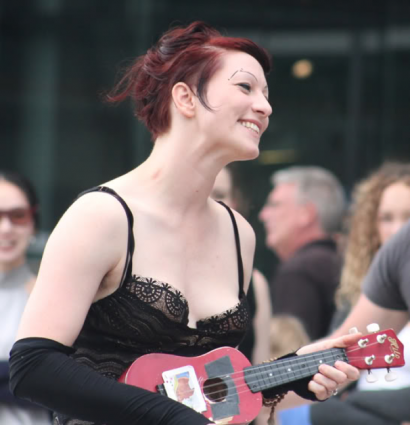 ….then we piled into the gallery, and i let everybody HAVE AT ME with the fucking stickers…. 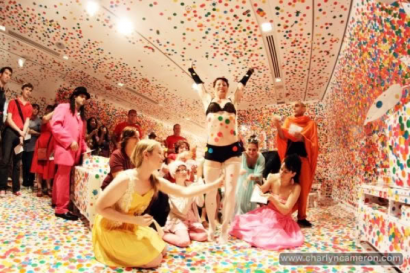 and played ukulele in the kitchen…. 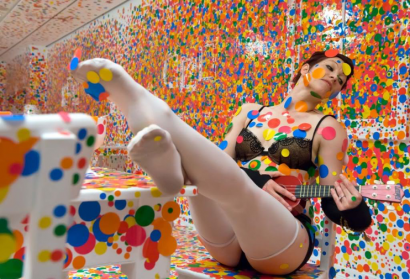 and played the piano…. 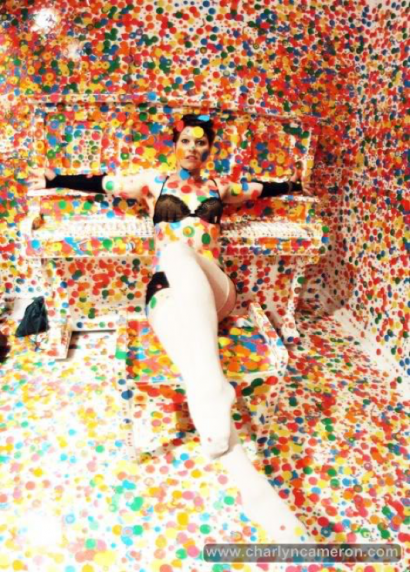 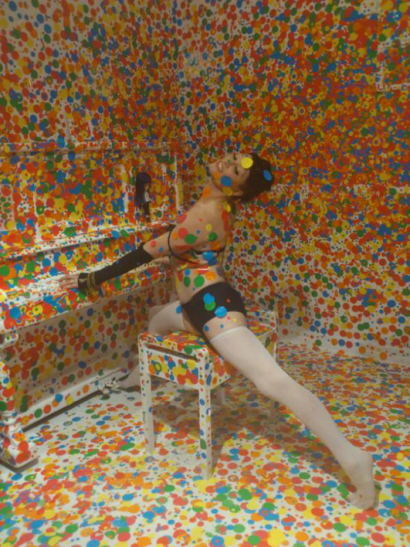 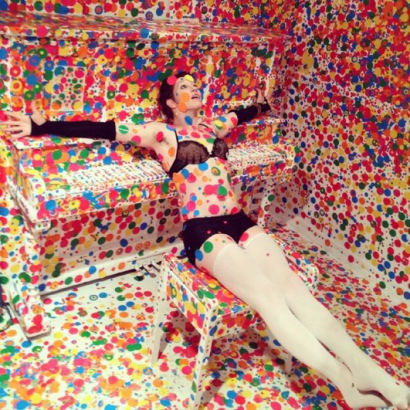 and jumped into the arms of my beloved…. 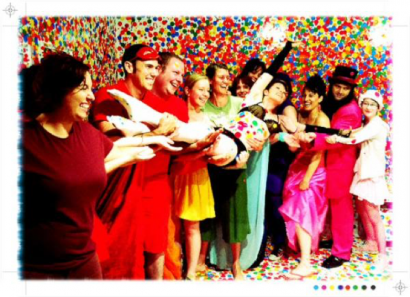 and right around that moment….my bad mood was lifted.

take THAT past self in bondage of critical academic discussion

I OBLITERATE YOU WITH PEOPLE WEARING TOGAS AND PROM DRESSES

if only an option like this was available on a daily basis…….
that room healed me.

i went to the show that night with a reminded heart, and the show was fucking fantastic. 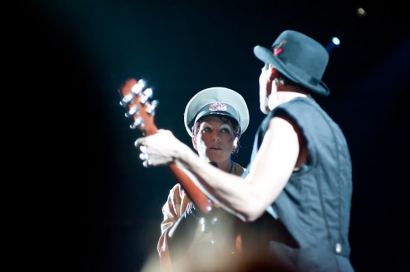 (this, and the next few photos by erin smith)

and there was THIS….a secret surprise performance from captain kid of the boy-circus troupe BRIEFS!!! 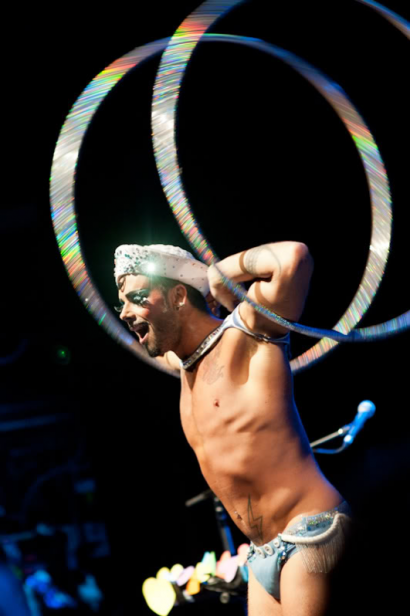 this also improved my mood. sparkly cock ALWAYS does.

but: the final breaking of my bad mood came with a moment brought to me by our incredible opener, justin AKA the bedroom philosopher: 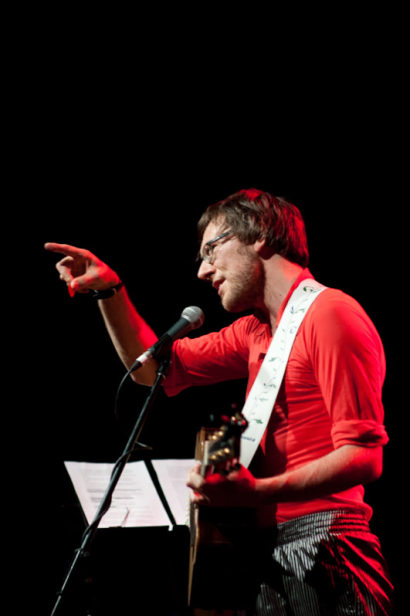 he’s known in australia for a song he wrote called “northcote”, a very fucking funny ditty that makes fun of hipster stereotypes in melbourne.
at the brisbane show, instead of the usual verses, he informed the crowd that he’d recently gone into a terrible 3 am youtube hole reading the comments on the “northcote” video.
he decided the only way to combat the evil was to incorporate the comments into the song.
so he sang “northcote” and replaced the standard verses with a recitation of long, stupid, un-intentially hilarious youtube comments read in a mlebourne hipster accent.
i don’t think i’ve ever loved anybody more. us and our internet holes. infinity death.

thank you yayoi…..through staying alive you have made me more alive.

this is what we do for each other.

this is how it works.

go into the bathroom
secretly crouch in the white bathtub or shower
get out the rainbow magic markers
you can DIY it in a pinch.

p.s.
here’s a youtube clip of brian’s rhumba simon says line….if you want to see a bunch of people wildly running around in a park with confused onlookers….
http://youtu.be/UqDD9t2PD-s

also….if your’e in brisbane & want to see the room for yourself, get your ass to GOMA. it’s FREE: qag.qld.gov.au

and the Best Hate Mail Letter of the Year award goes to….