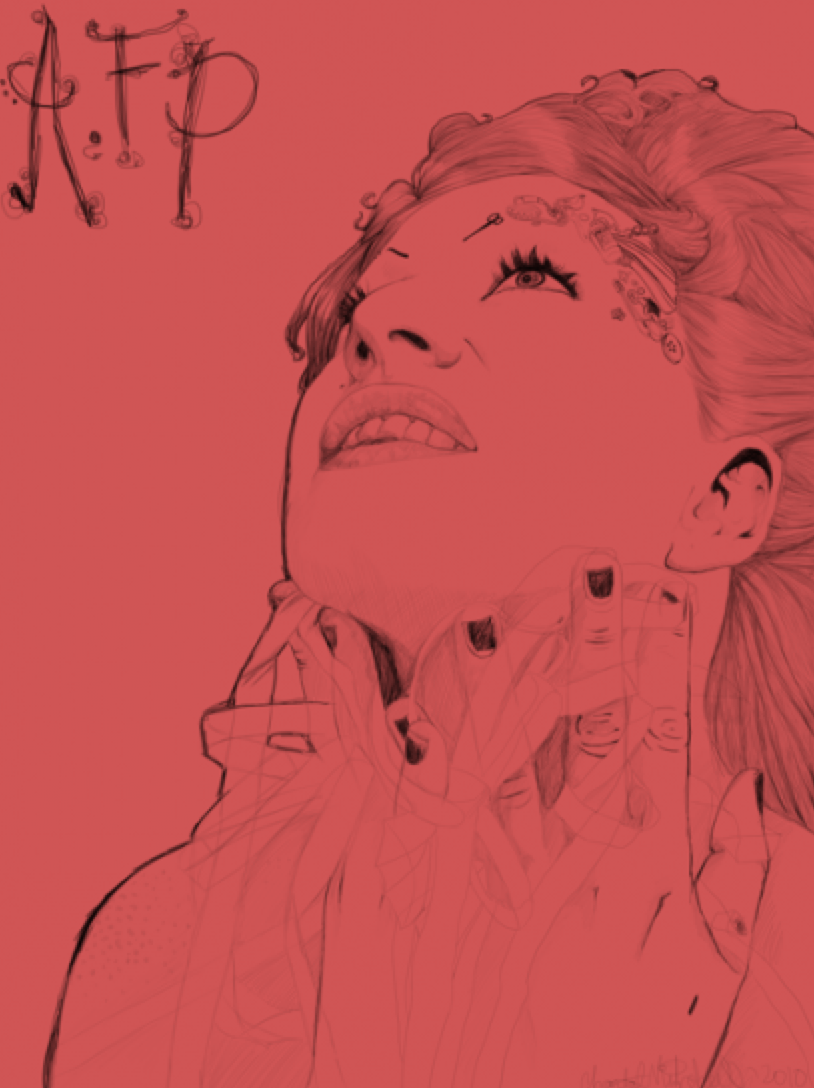 a couple things before i forget: you have 14 hours to order merch in time for xmas from post-war trade. including uber-groovy things like a card made out with any message you want, signed by me. do it.

also: i’m in SPIN magazine this month. there’s a four page spread with me & patton oswalt talking about music. it’s FUCKIGN HILARIOUS. go down to your local bookstorething and buy it, it’s (gasp) not online….but it looks kinda like this: 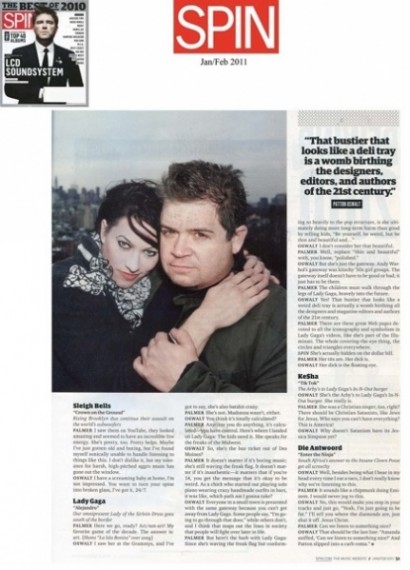 sitting alone in the apartment, feeling like air.
not cold air nor hot air, not blank air, not empty, just – calm in the storm.

superkate, my fucking amazing new assistant, has been in town for a few days and we’ve been doing marathon work parties.
(a count just now – for curiosity’s sake – tells me that i’ve sent 216 emails in the last two days).

setting up the australian tour, releasing tristan’s record, releasing the single, dealing with trying to be a boss to #teamchaos as about 150 flying parts whiz about the room, and also fielding the general daily grind with the holidays on top has been…enlightening. every day, i let go a little bit more of the shit i cannot get to. zen palace over here.

beth’s been doing the best she can to do the work of an entire merchandising factory, shipping dock, accounting department, and design department, and lots of people (almost exclusively via twitter) have been answering her desperate calls for help with moving shit up stairs due to a broken brooklyn elevator. yes, this is the punk rock way, my friends. shit breaks. ask for help.

i feel like less of a person when i work 8-hour email days.

i told kate, on our dinner break last night: i lose all my romance.

i really do. i get completely focused on clearing shit out and getting fucking shit done, and it’s really interesting to see what happens when love intrudes, when neil calls.
i can watch the inside of my head, which has been in evil-take-no -prisinors-work-mode, saying WHAT IS THE PURPOSE OF THIS FUCKING PHONE CALL AND HOW CAN YOU MAKE IT AS CLEAR CONCISE AND AS SHORT AS POSSIBLE, which is how i feel on most business phone calls.
i imagine that this is what many object-and-goal-oriented men feel when women complain that they don’t want to “talk”.
and then it only takes me a second to breathe and remember that nothing matters very much, and that i love him, and that he doesn’t deserve to be on the other end of a manic office clerk. and i find myself again.

sometimes i look back at all the years of doing insane self-everything for the dresden dolls and think: i used to not be able to stop.and it’s no wonder i couldn’t even consider holding down a real, committed lover. i used to just attack life and all of my relationships with a machete.

sometimes i hate that it worked.

because it did work. my band got famous. the hard work and touring was insane, but it bore fruit in the form of real success all over the world. and?

sometimes i’m glad i don’t have to see the person i was – i was so unable to sit and absorb because i was too fucking focused on The Thing only. i still turn into that person, especially when things get too busy. yoga saved me. it kept my soul intact. it was the one pounding door reminder that the story i was caught up in was completely imagined. year by year i practiced the art of letting go and i think the art of letting go was what made things work in the long run. i never resented it when things went wrong, not for very long. and i never expected anything more than to make a living.

possibly unrelated (your call) here’s a cloud in the shape of a map of tasmania that steven’s friend sent from her phone…. 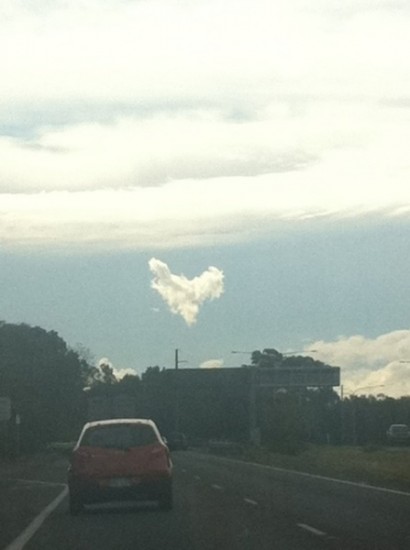 meanwhile….jesus. my place is a FUCKING MESS. i haven’t even left for tour yet and i’m already exhausted. am i getting old, or is it just bad timing?

there’s a beauty in the fucking mess, though. shit’s getting sorted. gifts are being jettisoned to different parts of the globe.
i spend my time alternately thinking about whether the publicist is up to speed, whether i should finally open those letters, and what would be a good purpose for the photo someone sent me of a really old woman listening to me on the internet is. duh – i shall simply throw it on the blog.

WE ARE THE MEDIA. 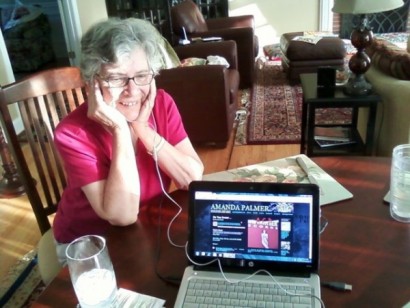 (photo by becka lee, of her grandmother listening to “the truth” after hearing me on NPR)

i feel like this photo seriously says it all.

my “map of tasmania” single has ONLY been released in two ways: on this blog and via twitter.
that’s it.
and thousands of people have heard it (and more to the business point, donated money to download it….BY CHOICE).
i rely solely on their personal recommendations to others. it’s so simple. we are, literally, the media.

wikileaks, the power of twitter, watching what’s been happening with the BBC, talking with my housemate geeta the other night i was reminded to be in awe of how FAST shit has changed.
(read her blog, by the way, she’s a fantastic voice in journalism and her brian eno book is blazing on the charts, i highly recommend it: theoriginalsoundtrack.com)

here are some amazing shots from the video shoot of “map of tasmania”, it’s hard not to give too much away.
we get to see pope’s rough cut on tuesday. it’s like christmas. wait, it is christmas. fuck it…whatever.

me and guy, the night before the shoot, making up the choreography for the dance.

guy was in cabaret with me (he played “louie”, the SHY one). he’s AMAZING: 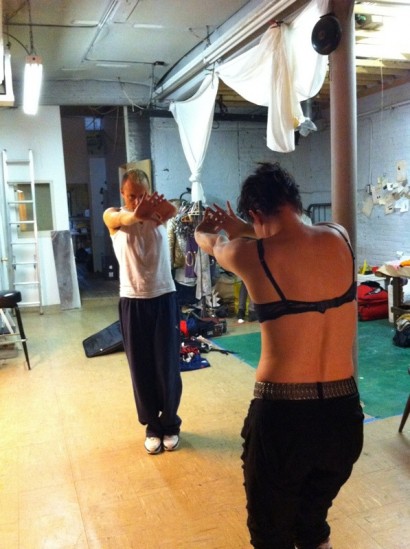 this is pope talking with and zea barker, my old housemate and the wardrobe coordinator for the shoot. 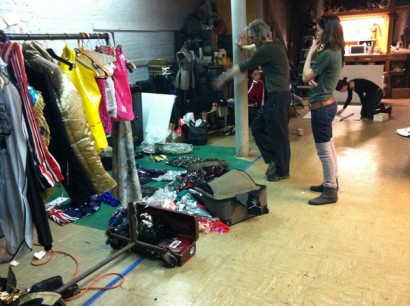 the whole video was shot in pope/james’ apartment in brooklyn.
bless. 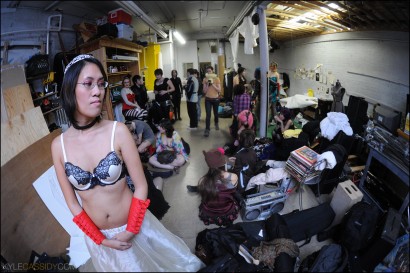 a group shot of the dance party extras…. 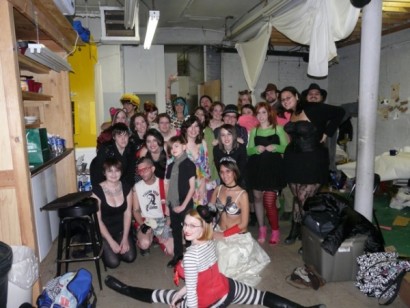 i won’t TELL you what these are….. 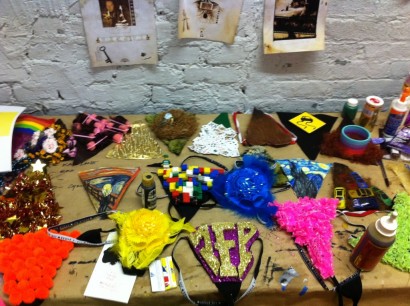 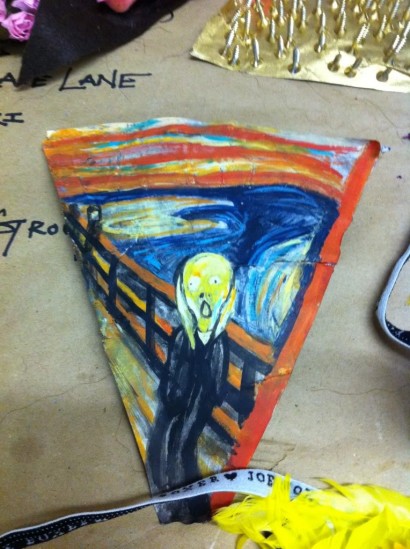 but this? this is an 8 yr old. (in reality….he’s nine. i promised i would clarify….proof.) 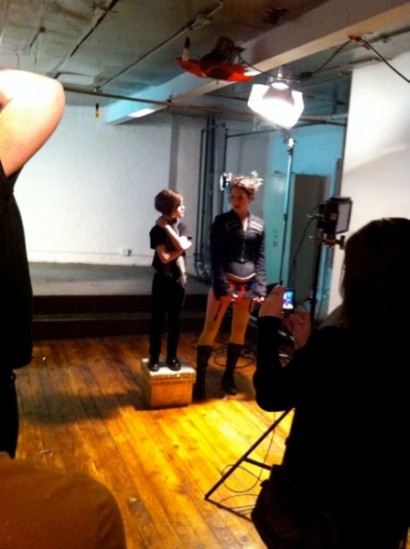 here is me, talking on the phone with neil during a short shooting break. 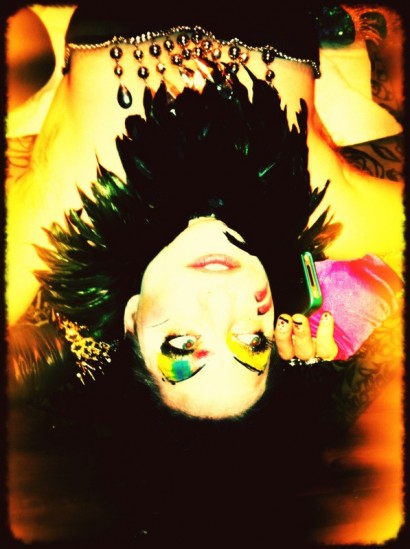 i wish he could have seen what he was talking to. (photo by desi)

kyle cassidy….master of photo. i love this one…. 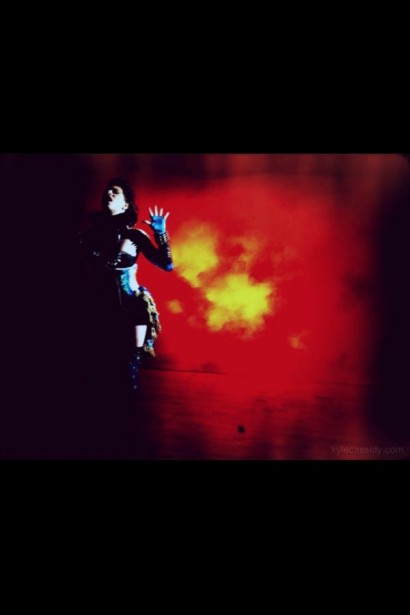 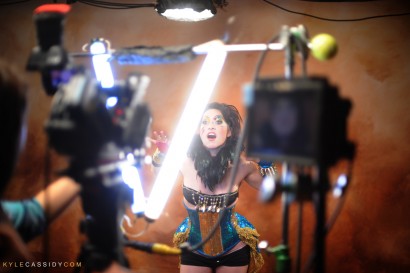 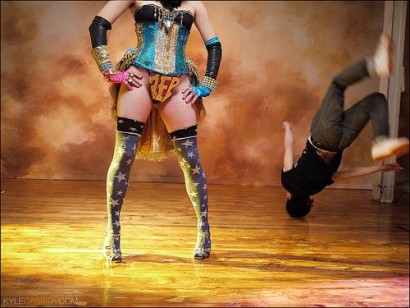 and the same dope kid blowing minds outside on the sidewalk…. 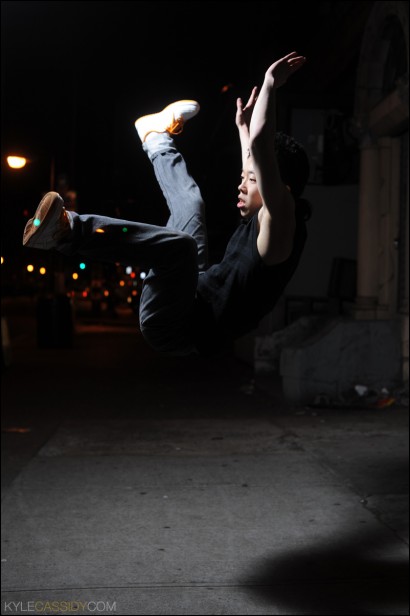 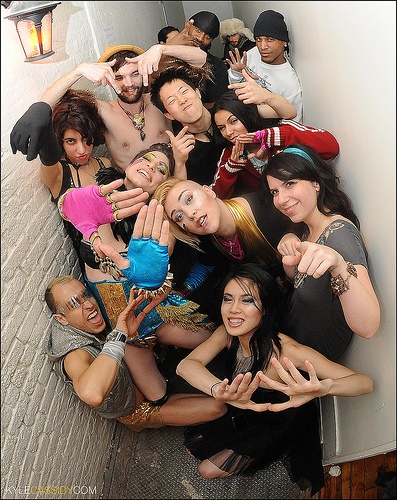 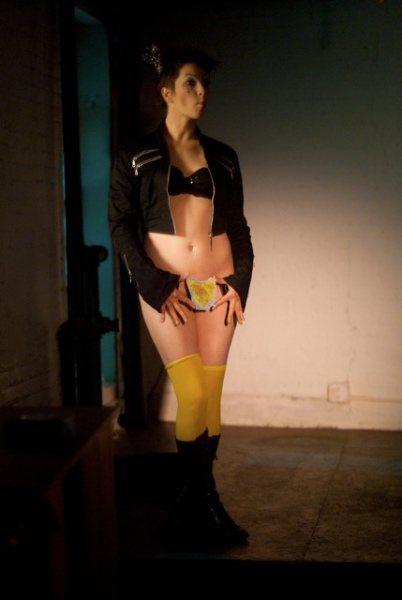 here is my fucking arm all chaffed from bling, post shoot: 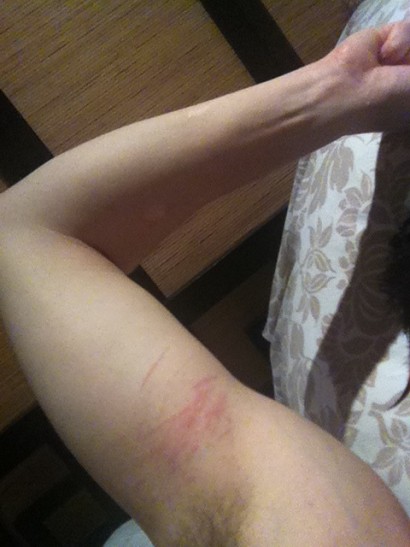 thank you for all your comments lately.

there’s obviously a whole discussion we obviously need to have, about hair.
i’ve been meaning to have it forever.

p.s. I CANNOT WAIT TO SEE THIS VIDEO. end of story. ok i shut up. and sleep. go get the song, by the way: http://music.amandapalmer.net

p.p.s. unrelated (sort of), but i fucking love this art that just came in… 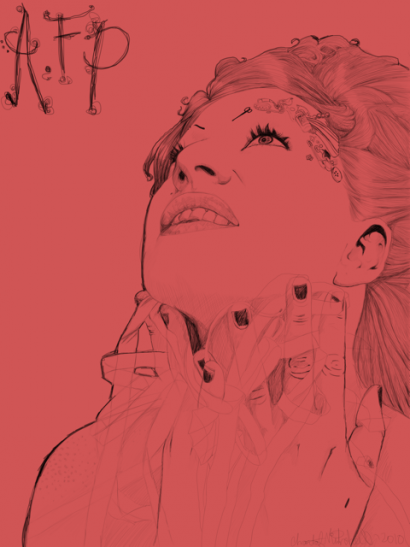 by @angelredflame, based on a photo by ron nordin…
for all y’all folks on twitter who dig the #AFPart, make sure you’re following the new profile: @AFPart

The Ballad of The Screaming Girl

mobile cleansing and the babies thrown out in that bathwater